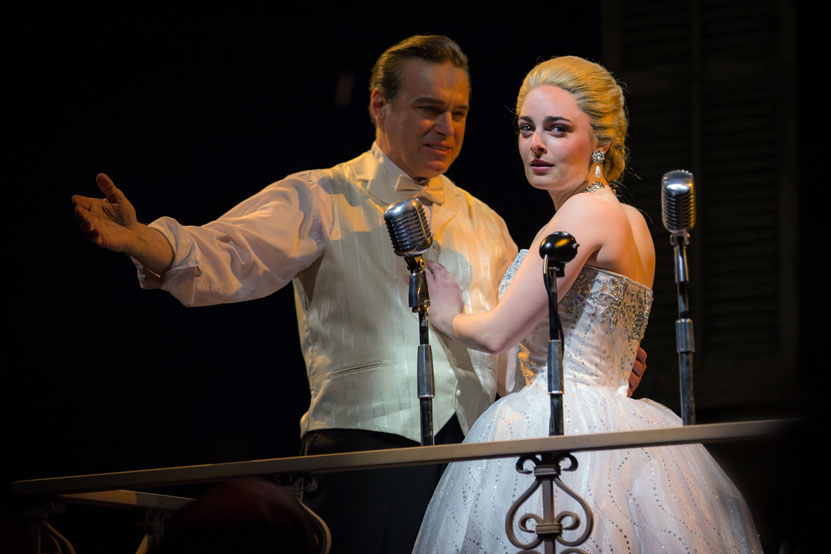 Andrew Lloyd Webber’s rock oratorio “Evita” sings a story that never tires in its retelling: the disenfranchised individual, working with their particular skill set and virtually on their own, can rise from obscurity to answer the largest dream they dare. The original Broadway production starred Patti LuPone as Eva and Mandy Patinkin as Che; their Tony Award-winning performances turned them into stars.

It serves us all to remember that a score reaching toward the world of opera with a rock-concert sensibility is shadowing the type of event that is not served up eight times weekly. Lloyd Webber’s lead is onstage almost constantly and almost constantly singing, employing a wide range and various vocal styles. Multiple Eva covers were engaged to get LuPone through some performance weeks. Aficionados continue to insist that the vocal stress of singing the role forever took some sheen off the promise of LuPone’s voice. But it is Eva’s story and, in this instance, told to a large extent by Eva herself with occasional commentary from Che. Even with solid direction and piquant supporting performers, a production of “Evita” stumbles without an Eva equal to the task.

There is much here to applaud. Eliza Palasz’s Mistress and David Schlumpf’s Magaldi are newly-imagined and effective. As Juan Perón, Larry Adams is wonderful; his pliant baritone voice adds nuance to his rich characterization.

When young artists find themselves in a role that may damage them in such a way as to shorten their career, there is enough responsibility on the table to pass the platter more than once. Artists want and need to work. To be seen in an iconic role is no different a dream than that of the would-be corporate president.

When I saw the show, it seemed that Hannah Corneau’s voice was not optimal for the role of Eva and that she had not acquired the vocal technique sufficient to offset that conundrum (Samantha Pauly shares the role at some performances). I could not hear the story against the sound of my apprehension. (Aaron Hunt)