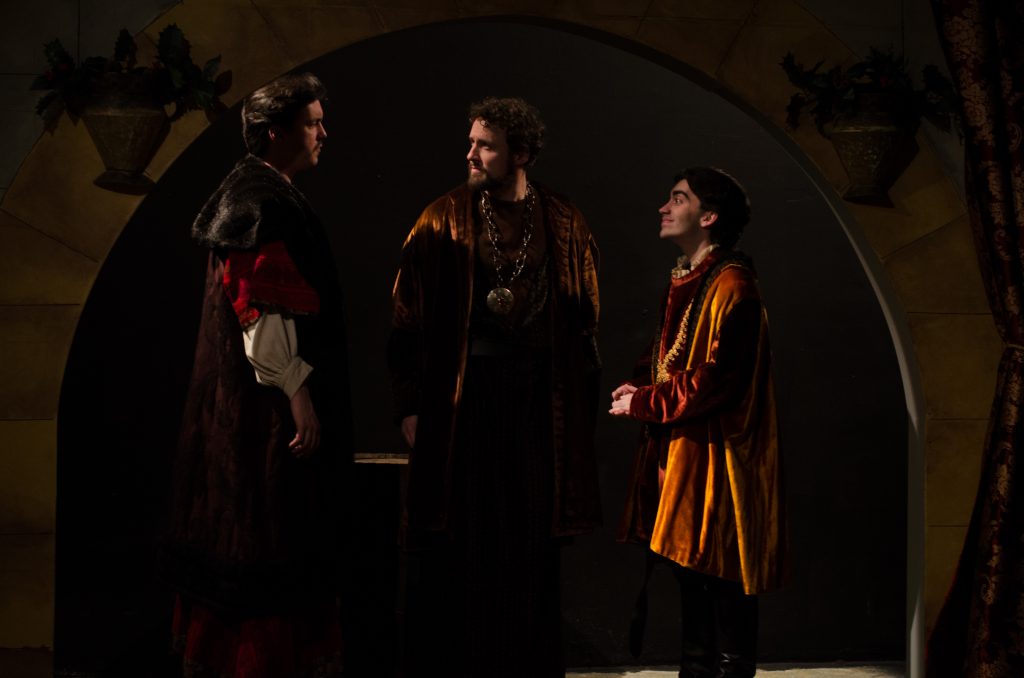 James Goldman’s 1966 period piece with contemporary colloquialisms has played the world over, buoyed by the success of the 1968 film starring Katharine Hepburn and Peter O’Toole. Henry II and Eleanor of Aquitaine’s dysfunctional family, as seen through Goldman’s witheringly funny eyes, continues to delight today. Goldman’s Shakespearian barbs are so neat and tidy as to be easily committed to memory. The actors in this play had better get them all out as fans in the audience might not be able to prevent themselves from chiming in, like “Rocky Horror” meets “Hamlet.”

Set designer Jeremy Garrett, lighting designer Jessica Fialko, costumer Rachel Sypniewski and composer/sound designer Ben Sutherland create a space and an ethos for the fine performances drawn from the cast by director Brian Pastor. Turning one of Athenaeum’s black boxes into a twelfth-century palace is no small feat. Sutherland has fashioned music that is both evocative and, when appropriate, gently mocking.

Elaine Carlson and Brian Parry bring a great understanding of the text to their portrayals of Henry and Eleanor. Carlson makes the Chekhovian switches between high comedy and tear-jerking drama as effortless as turning out the kitchen light. Parry twinkles in direct proportion to his roaring.

As the three impossible-to-love sons, Jared Dennis (Richard), Nick Lake (Geoffrey) and Tom Murphy (John) are all terrific. Dennis allows the undertow of Richard’s vulnerability to bubble to the surface more often than some. Lake underplays a part frequently delivered in adolescent shouts and simpering sniggers. Both portrayals are honest and fresh.

I would rather that Heather Smith had hidden the steel under a heavier layer of gossamer and that the idea to play Philip with a heavy French accent had been outvoted.

If you’re shopping for history combined with some first-rate zingers you can carry home in your memory’s pocket, for tossing at an unsuspecting friend or coworker, spend a couple of hours with Henry and Eleanor. “What family doesn’t have its ups and downs?” (Aaron Hunt)