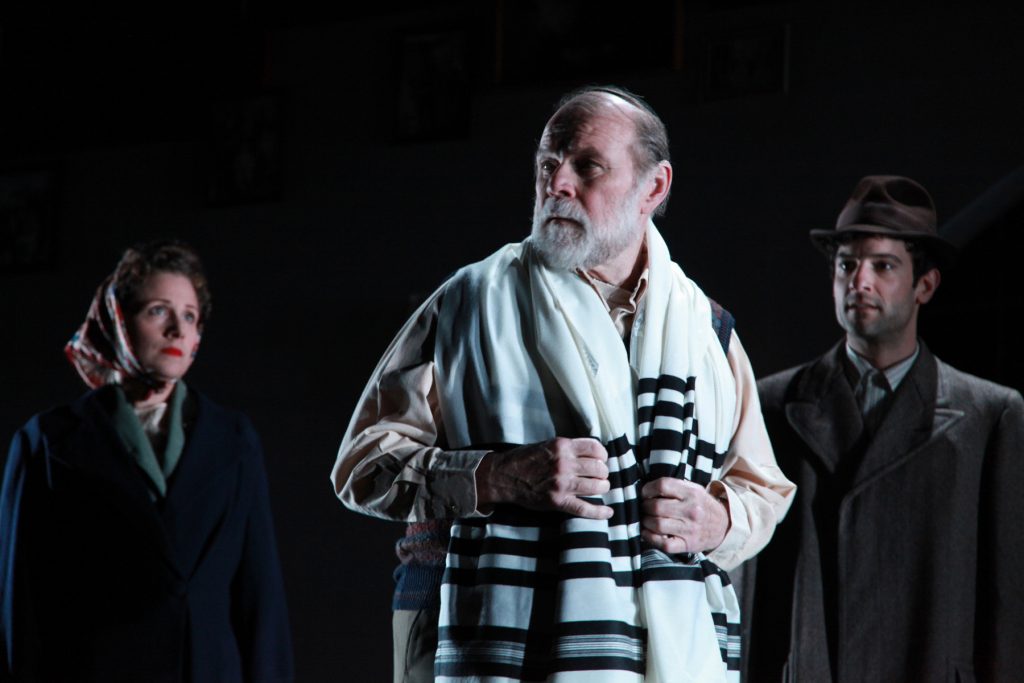 “A Splintered Soul” is among the more cynically calculating plays I’ve seen. Playwright Alan Lester Brooks starts with a crime story straight out of Ellery Queen’s Mystery Magazine then wraps it in a Holocaust milieu to demonstrate his depth and seriousness. What we end up with is two hours of smarmy and pretentious melodrama about one of history’s bleakest chapters.

The show is set in postwar San Francisco where a traumatized band of death-camp survivors attempt to create some sort of new life for themselves under the patronizing protection of the city’s Jewish community. Their spiritual guide is a rabbi-turned-partisan who fought the Nazis in Poland during the war after seeing his family murdered.

He and his flock—a youthful trio of refugees in different stages of grief and recovery—are haunted by memories of what they had to do to survive in hell. Treated realistically, the scenario may well have worked as a look at how alienated, guilt-afflicted people reintegrate into society. But this isn’t a character study, it’s a potboiler. Brooks’ splintered souls are reduced to stick figures in a contrived plot about art theft, false identity and an implausible act of rabbinical violence. Every scene is overwritten, every point underscored in cape-swirling Victorian style. Musing on how to dispose of a body in San Francisco Bay, a character declares to the audience: “A good row… splash… and it’s done!” The statement is followed by a thunder crash.

As for the performers, there’s nothing that a week or two at Monty Python’s “Royal Hospital for Over-Acting” couldn’t cure. When stuck with weak material, even veteran actors tend toward excess and the director seems to have neither noticed nor cared.

It’s unclear what we’re supposed to take away from this morally and intellectually tepid show: That survivors should stop kvetching and get with the program? That Auschwitz raises no unsettling questions about the nature of humanity, the law or the state? The issue I was left pondering is whether we need a moratorium on Holocaust-themed art now that it’s become just another showbiz marketing ploy. (Hugh Iglarsh)