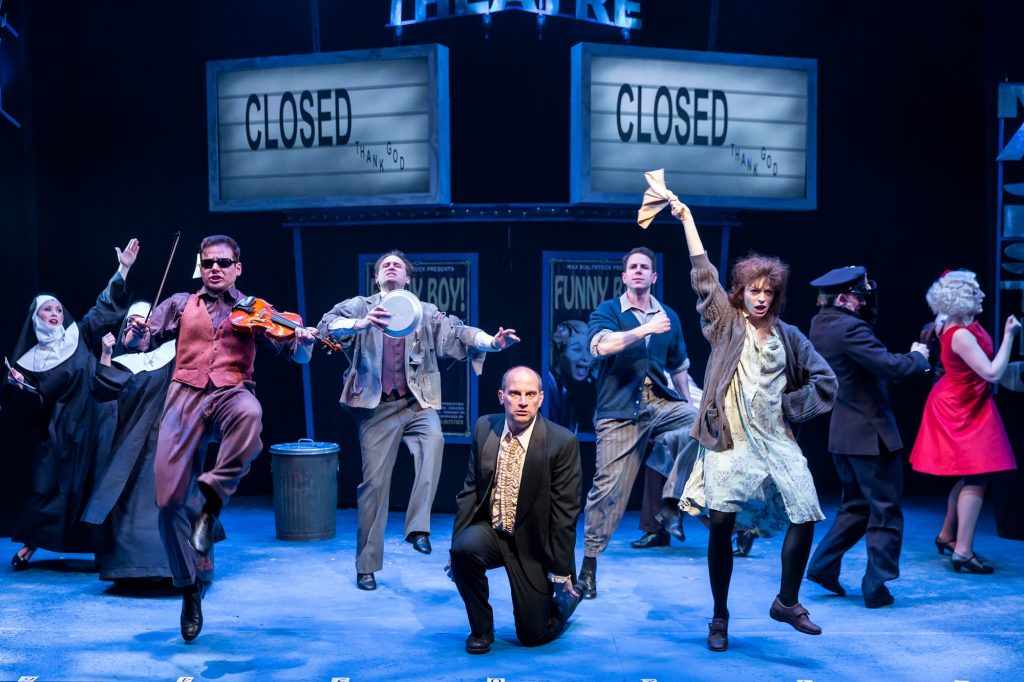 The cast of “The Producers”/Photo: Brett A. Beiner

Have you ever had a dream? A fantasy? A certain frisson of something fabulous to come? A big vision, a prophecy of something monumental, transcendent, opulent? Beyond that, do what you must and cost what it will, will you make it a reality? If so, you might be a Producer. Whether that reverie is Stephen King’s “Carrie: The Musical” or surefire hits like “Moby Dick—On Ice!” or “The King and Us,” a true Producer will see it through. If it means they expose themselves to chorus girls with abhorrently pneumatic bosoms wearing nothing but 800 pounds of completely transparent, glittering rhinestones, so be it!

This is the noble profession Max Bialystock (Bill Larkin) represents and the lofty ambition to which timid accountant Leo Bloom (Matt Crowle) aspires to in Mel Brooks’ “The Producers,” done to a hectic perfection under the direction of L. Walter Stearns, Eugene Dizon and Brigitte Ditmars.

The play begins where the Titanic ended: a catastrophic devastation of epic proportions. Bialystock’s newest Broadway offering, “Funny Boy” (or “Hamlet: The Comic Musical”), closes the night it opens. Bialystock, who alternately glowers, rants, belts out egomaniacal arias and, to fund his shows, swindles old ladies who pass out checks for sex, is ever-so-briefly stymied by the rule-abiding and subtle genius of Leo, who calculates that, with appropriate prestidigitation, a flop easily surpasses a hit for cash.

Zany antics ensue as the pair make it their mission to discover and produce the worst play on Broadway. Hint: it involves Nazis and showgirls with bier stein pasties and was written by a porcelain-faced, lederhosen-wearing pigeon-tender named Franz Liebkind (Harter Clingman). Jason Richards is the roaring diva director Roger DeBris; Sawyer Smith is his glamorous hissing pussycat consort.

“Reviews come out a lot faster if the critics leave at intermission,” gripes Bialystock in Act One. This one cheered and wept, became a dangerously obsessed stalker of Ulla (Allison Sill), a Swedish Marilyn Monroe/Betty Boop hybrid with a voice of a trombone, and dirty old maiden/showgirl Leah Morrow and was finally dragged off singing “Springtime for Hitler” loudly down the street on Pesach. (Irene Hsiao)