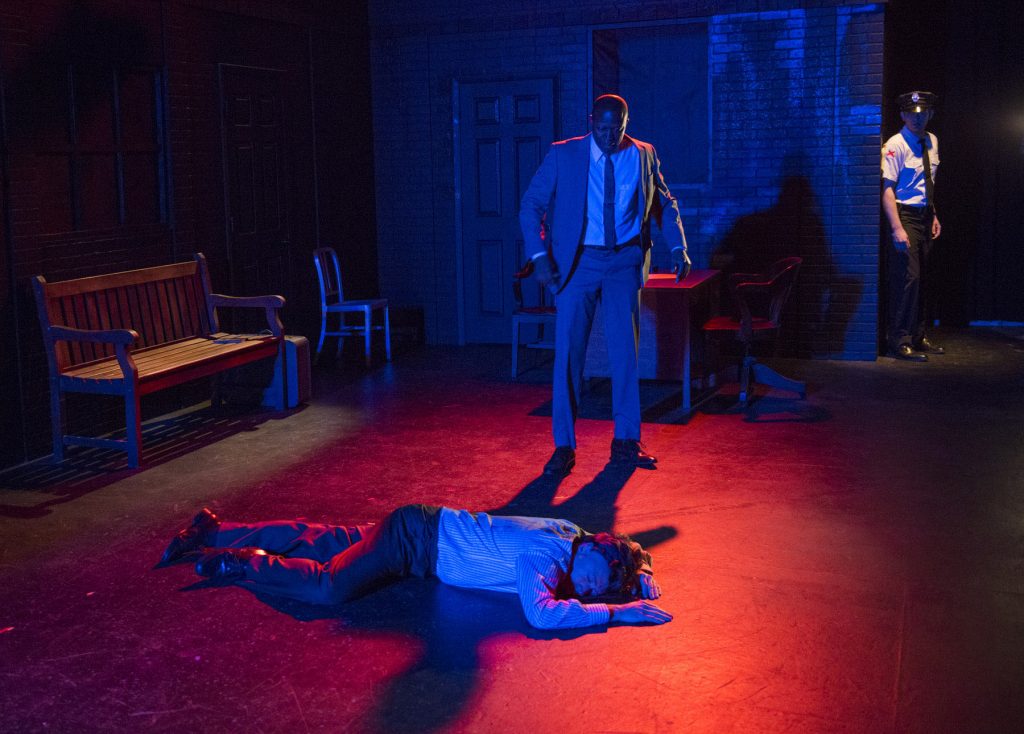 Everybody talks about the passing of the American Dream but what about the persistence of the American Nightmare? The latter unfolds in black and white, a violent and never-ending story about racial segregation, intolerance and inequality. Based on the great 1965 novel by John Ball, “In the Heat of the Night” tells one part of this American story the way it should be told: in full noir-like splendor with dark, sweaty, tough-talking and hysterical cinematic moments.

The time is a summer night in 1962 in a hapless and hopeless little town in Alabama. A rich white man is murdered and no one knows why, least of all the anxious, impulsive new police chief, Gillespie (Joseph Wiens). He orders his night-patrol officer, Sam Wood (Drew Schad), to round up the usual suspects. Wood is a decent guy but like every man on the force he has a racist imagination and he grew up in the Jim Crow South. He spots a black stranger in a suit (Manny Buckley) at the train station and immediately starts spinning a sinister scenario in his mind about likely guilt. What clinches it for Wood is when he discovers that the suspect, Virgil Tibbs, has money in his wallet. “What’s a ‘colored boy’ doing with so much cash?” he wonders.

To the surprise of Wood and the chagrin of Gillespie, Tibbs turns out to be a California homicide detective. But the chief soon sees an advantage: he could force Tibbs to solve the crime and then take all the credit for himself and the department. Exploiting Tibbs’ investigative ingenuity ultimately breaks open the murder case and inadvertently reveals the town’s dirty secrets including its desperate efforts to resist racial change.

Director Louis Contey’s “In the Heat of the Night” is intense and scary good. It keeps realistically playing the nighttime murder over and over with a new assailant/suspect each time. We flinch and cringe, particularly when we begin to imagine that the racially related violence may originate from the police force itself. The art is pure noir but the reality is more modern and far darker. (Michael Amedeo)