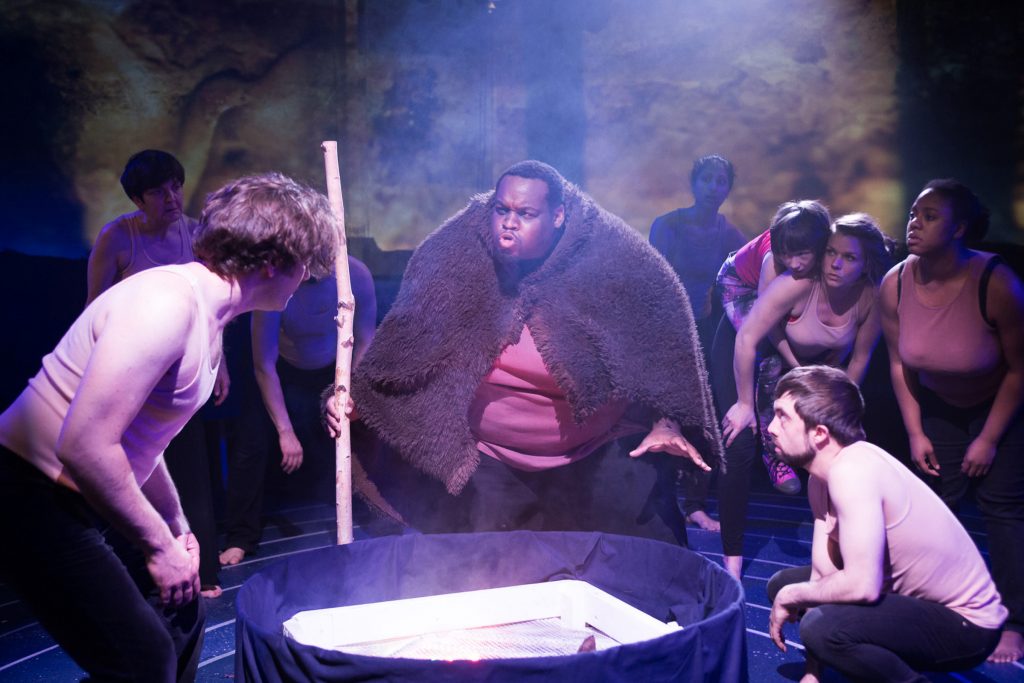 The cast of “Connected” at Collaboraction/Photo: Joel Maisonet

In celebration of its twentieth anniversary, Collaboraction mounts a production as grand in scale as humanly possible. Spanning the birth of the universe to post-apocalyptic America, “Connected” wrangles with perhaps the most hotly contested issue of all time: the nature of the human spirit.

Written and directed by Collaboraction’s artistic director Anthony Moseley, “Connected” is framed as a children’s story. Lead by Moseley’s eight-year-old daughter, this diverse and diversely talented ensemble recreate scenes that illustrate a warm and fuzzy vision of humanity punctuated by moments of striking violence.

As “Connected” moves through time, it gradually becomes concerned with setting a strong moral example. In doing so, it chooses to avoid internal conflict, a fact well illustrated by a modern campfire scene wherein a semi-affluent family waxes about the state of the world and what “we” can do. And while there is nothing egregious about this mentality, when one character admits that she does not vote because she doesn’t feel included in the political process, an admission deepened by her non-whiteness, her peers offer her little more than rebuke in return for her honesty. In this moment, voting transforms into a paramount expression of goodness, a civic duty that “Connected” is unwilling to suggest might be an effigy of our actual freedom.

“Connected” can be preachy, which makes its cynical departure into the inevitability of nuclear warfare unexpected. All of a sudden, the destruction of earth becomes a foregone conclusion and the only option is to flee the trees and blue skies for some vague sci-fi utopia somewhere outside our galaxy. A half-baked concept that could use more stage time to unpack, Moseley’s ending is nevertheless optimistic. Still, I hoped for a greater test of the play’s unchallenged sense of entitlement than global warfare executed by Russia and North Korea.

“Connected” does bring up some key issues in our hyper-communicative modern state. Yet it often does so from an inflexibly Luddite perspective, rarely addressing the power of connecting people who don’t agree. Instead, it opts to portray a hand-holding vision of the world that was never true in the first place and is somehow less satisfying than our more complicated reality. (Kevin Greene)