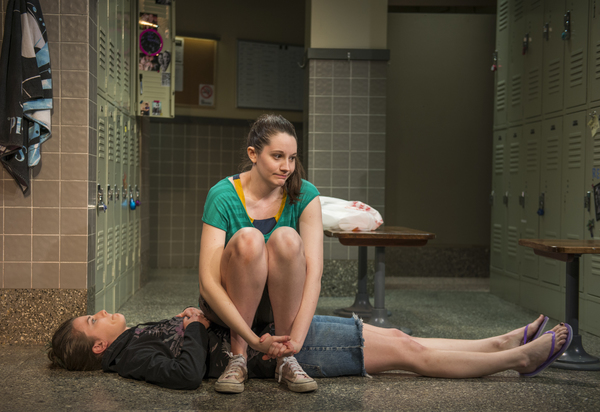 Nobody wants the responsibility of telling kids about sex. That’s evidenced in the squeamish way the subject is handled in mainstream media as well as the biologically centered sexual education taught in schools that haven’t defaulted to abstinence. We learn about how babies are made but we don’t learn about how they are unmade. Ruby Rae Spiegel’s “Dry Land” traces a course of unmaking all too common and yet still largely invisible. A heart-wrenching tale of social neglect, Spiegel’s play is also an essential portrait of female friendship.

Directed by Hallie Gordon, the muse of artistically inclined young actors citywide, “Dry Land” is about the budding relationship between Amy (Bryce Gangel) and Ester (Jessica Ervin). While their interactions take place exclusively within the girl’s locker room before and after swim practice, their dialog expands considerably beyond those mildew-covered walls. Spiegel has an ear for detail, infusing her play with references to peripheral characters and authentic locales. She has an ability to capture an entire person in a brief, almost offhand description. “He cries in his car during lunch,” Amy tells Ester at one point about a teacher. Amy’s absence of concern about the reason why firmly plants this story in the insulary teenage universe.

And yet that same characteristic comes back around when the girls talk about each other. “Do people call me a slut?” Amy asks at one point. Gangel’s body language suggests she wants a “yes” and a “no” simultaneously. Amy’s messy descent into self-fulfilling prophecy is hugely compelling. She is complemented exquisitely by Ervin’s Ester, the naïve, faithful and honest friend that can make those tumultuous years of high school a little more bearable.

“Dry Land” is one of those plays that come around once a year if we’re lucky. It is a production of incredible grace and fury that plunges to breath-stealing dramatic depths. Yet it would be wrong to call it fearless. This play’s bravery is in direct reaction to a very real, very tangible and very timeless terror. The world over has given women so much to be afraid of that a play such as this is itself a revolutionary act. And the existence of Rivendell Theatre Ensemble is nothing short of a miracle. (Kevin Greene)