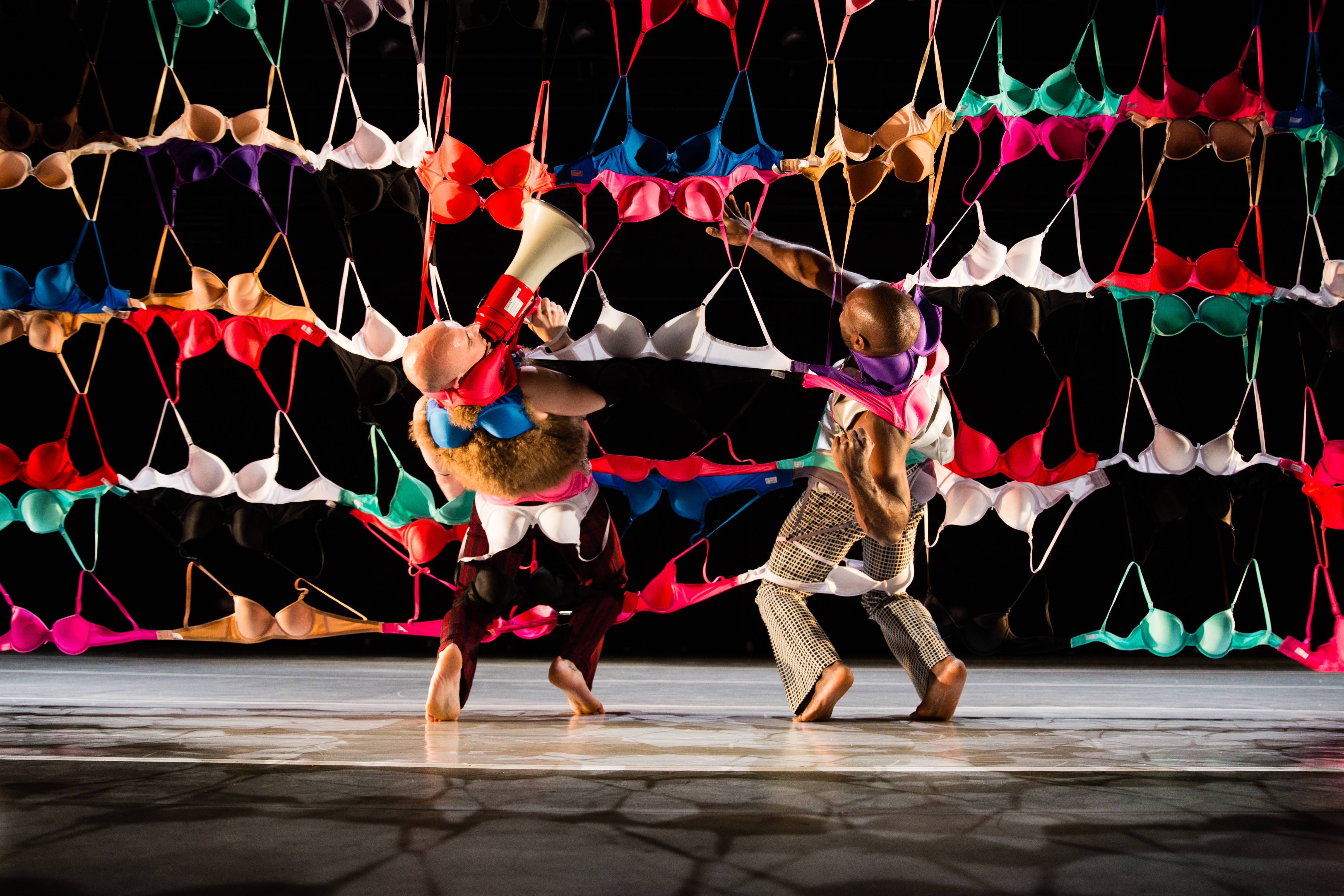 Carrie Hanson picks up after last year’s “Power Goes”—a brilliant evaluation of personal and political power through the lens of the Lyndon B. Johnson administration—back in the sixties, her talented cast of seven lined up facing the audience, repeatedly singing the first line of the chorus to “Me and Bobby McGee.” A woman sprawled out with a megaphone provides vocal coaching after each iteration (“um…grittier”). As the phrase evolves so does the physicality of the singers until music, sexuality and righteous resistance burst into dance. “RockCitizen” is another examination of power, specifically resistance to power… and the power of rock ‘n’ roll to galvanize social movements through the heart and the glands. In one concise hour, Hanson touches on women’s lib, civil rights and LGBT movements through a mix of athletic dance, music, monologue and sound clips from speeches by James Baldwin, Paul Potter and Betty Friedan; it is dense with references—the Merry Pranksters, Abbie Hoffman and the Yippies—and reenacts a meeting between Nixon and Elvis Presley. A history of the Voting Rights Act is delivered in the form of a highly entertaining and informative one-man debate. The show dips a toe in later decades too, with mention of Occupy and a segment on the disastrous corporatized revivals of Woodstock, but the focus is definitely on social movement of the sixties. A few elements from “Power Goes” make a reappearance here: a snarling snap of the jaw that characterized self-obsessed, self-loathing aggression shows up midway through the piece and Bob Faust’s gigantic net of colorful bras hanging above the stage has a visual parallel to the striking wall of chairs from last year’s performance—though in this case it’s actively used by the performers to great effect. Hanson’s years of deeply researched, politically minded dance-making has made her tremendously adept at interweaving movement, text, historical reference material and stagecraft into a cohesive, entertaining, thought-provoking thesis to which all elements equally contribute—something few directors do well. Like much of her work, “RockCitizen” feels like an essay you finish reading that you want to pick up and start from the beginning again. (Sharon Hoyer)

The Seldoms at the Storefront Theater, 66 East Randolph. May 5-15, Thursdays-Saturdays at 7:30pm, Sundays at 2pm. $15 general admission, $12 students. Tickets at www.theseldoms.org/rockcitizen.