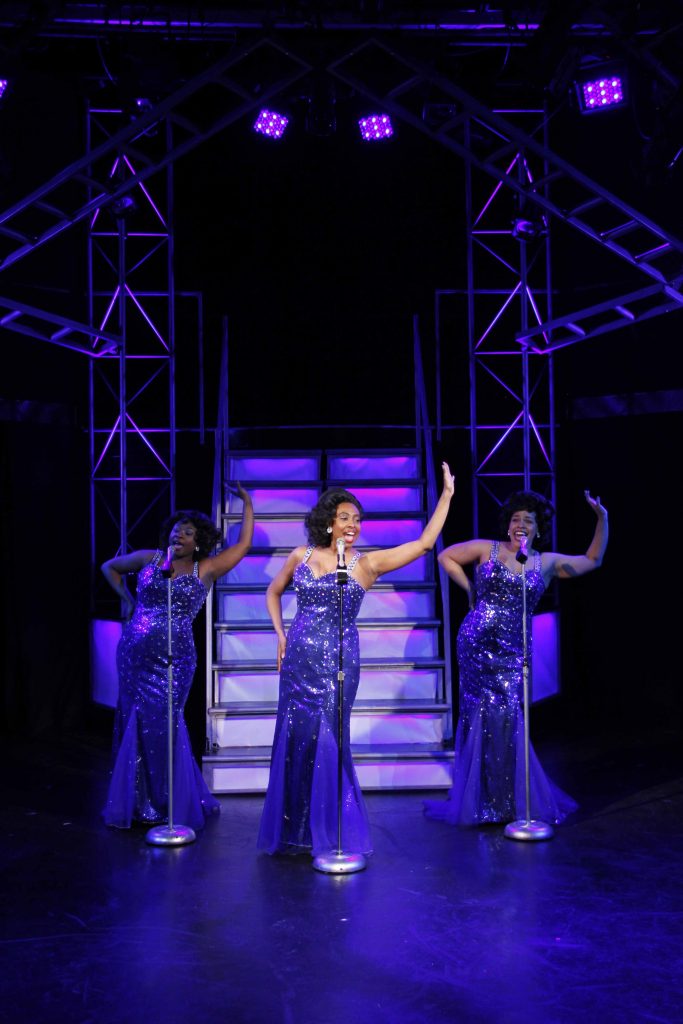 There are some musicals that come with the burden of great expectation. “Dreamgirls,” which made its Broadway debut in 1981, is one such example. The heart-stopping performance of Jennifer Holliday’s “And I Am Telling You” is so etched in the public’s mind that every succeeding performance is measured by that standard. Is it fair? Absolutely not, but let’s be honest, when you have a precedent of that magnitude in your mind, expectations are subconsciously looming throughout the performance. We expect certain notes to be hit, certain dance numbers to make us groove and the overall performance to leave us wowed. Porchlight Music Theatre’s production of “Dreamgirls” goes above and beyond our subconscious expectations.

The story of this iconic Broadway musical is one of dreams and the shark-infested waters we must sometime swim to reach them. Three young girls, Lorrell Robinson (Katherine Thomas), Deena Jones (Candace C. Edwards) and Effie Melody White (Donica Lynn) are thrust into the industry as background singers for the infamous James Brown/Jackie Wilson-infused Jimmy “Thunder” Early (Eric Lewis). Throughout their journey they are forced to grow from naïve young girls trying to make a dream work to women learning the power of redemption and forgiveness.

Director and choreographer Brenda Didier has taken this sprawling musical and ably contained it on the modest Thrust Theater at Stage 773, creating dazzling performances accompanied by Doug Peck’s musical direction.

The performances from the entire cast are pure magic but Eric Lewis especially brings the soul and, dare I say, funk every time he touches the stage. Donica Lynn makes the hairs on your skin rise with her rich and powerful voice.

One can’t forget the set design by Jeffrey D. Kmiec and Greg Pinsoneault, which, albeit simple, when combined with Denise Karczewski’s lighting design and the alluring costumes by Bill Morey make for one entertaining night. (Loy Webb)