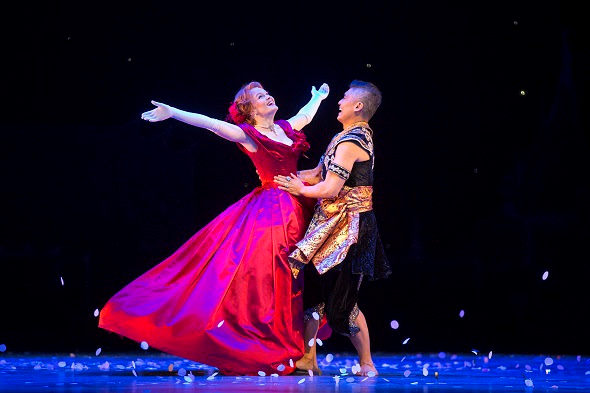 Lyric Opera of Chicago has found a formula that comes closer to a successful collaboration between the resources of a major opera company and the magic of musical theater. This “The King and I” employs the sort of voices that approach the color and control, if not the size, that one might hope for in an operatic venue, while maintaining the clarity of characterization upon which a Broadway production relies.

Lee Blakeley shepherds heartwarming performances from his large cast and conductor David Chase transforms his orchestra into a necessary character to the pulling of heartstrings. Peggy Hickey’s choreography of “The Small House of Uncle Thomas” cunningly combines the poses and movement of Thai classical dance drama with the balletic style of the influential ballet master Marius Petipa; the excellent solo dancing of Lisa Gillespie’s Eliza is more than reminiscent of Clara in Petipa’s choreography for “The Nutcracker.”

Kate Baldwin imbues the character of Anna with all the inward fire and outward reserve that one could ask for in a nineteenth-century proper and determined British lady, moving effortlessly from the poignant ache of “Shall We Dance?” to a smart and steely “Shall I Tell You What I Think Of You?,” which gives Rex Harrison a run for his money by showcasing her flexibility to bounce between speak-singing and the melting lyricism. Baldwin’s voice possesses a rich variety of hues, moving fluidly between registers, employing smooth legato and crisp diction.

Paolo Montalban (King of Siam) thankfully delivers more of his music with a good singing voice than the predictable Yul Brynner-growling. Ali Ewoldt’s light soprano spins effortlessly above the staff where she is capable of outstanding control.

Rather than the operatic voice anticipated for Lady Thiang, Rona Figueroa sings with a disappointingly slender tone but her portrayal is grandly grounded.

This musical contains a greater percentage of dialogue-to-singing to further the plot than last year’s “Carousel,” contributing to the successful operatic championing of Broadway. (Aaron Hunt)