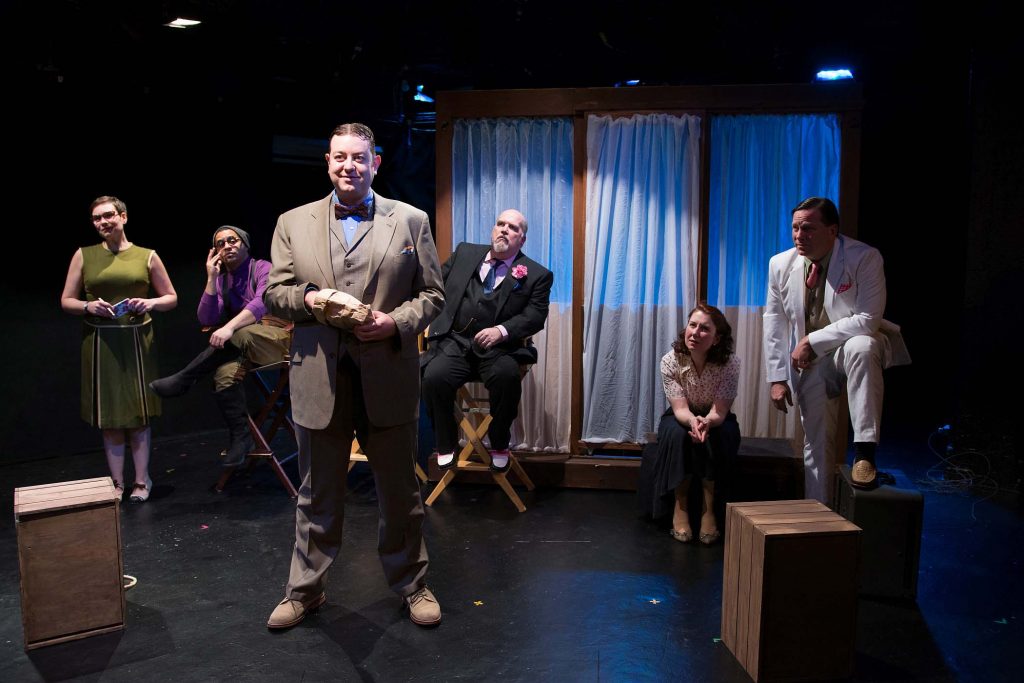 At first glance, the 1930s showbiz comedy “Once in a Lifetime” may seem like an odd choice for Strawdog Theatre Company’s final mainstage production in their home on Broadway. Following a trio’s ascension from struggling on the vaudeville circuit to selling snake oil in Hollywood, Kaufman and Hart’s play still zings with wit eighty years later. And yet as obsessed as they are with entertainment (and they are among the most consistent entertainers in the city), Strawdog is equally concerned with the playing of heartstrings, sometimes delicately and sometimes not, but always with humor and grace.

While much of the dramatic heft of the show relies on its three principals (Mike Dailey, Scott Danielson and Kat McDonnell), “Once in a Lifetime” is an ensemble piece through and through with ten additional actors covering an average of three or four roles apiece, often in rapid succession.

While the play’s morality and satire are often drawn in broad strokes, director Damon Kiely understands that delight is in the details. Whether it’s the playfully deceptive definition of “unspeakable” or Anderson Lawfer and Michaela Petro playing wisecracking repairmen one minute and ditzy silver screen stars the next, “Once in a Lifetime” seldom slacks and regularly shines flashbulb bright.

While there are funnier, smarter and more scathing portrayals of the Hollywood meat machine, “Once in a Lifetime” strikes the right notes for Strawdog’s semi-swan song. The play’s built-in “ditties” have been updated for the era and are enjoyably incongruous. They include innocuous interludes like “I Love It” and “Uptown Funk” as well as songs that reach, with occasional clumsiness, for symbolism with a capital “S.”

Case in point: the show closes with Miley Cyrus’ “Wrecking Ball.” If it feels like you’re being hit over the head with the majestic mallet the cast is using to preemptively and figuratively tear the roof off this sucker, you might consider forgiving the lack of subtlety in the gesture. Even if you elect to hold it against them, the enduring enthusiasm of this company forever tips the scales of fate in their favor. (Kevin Greene)