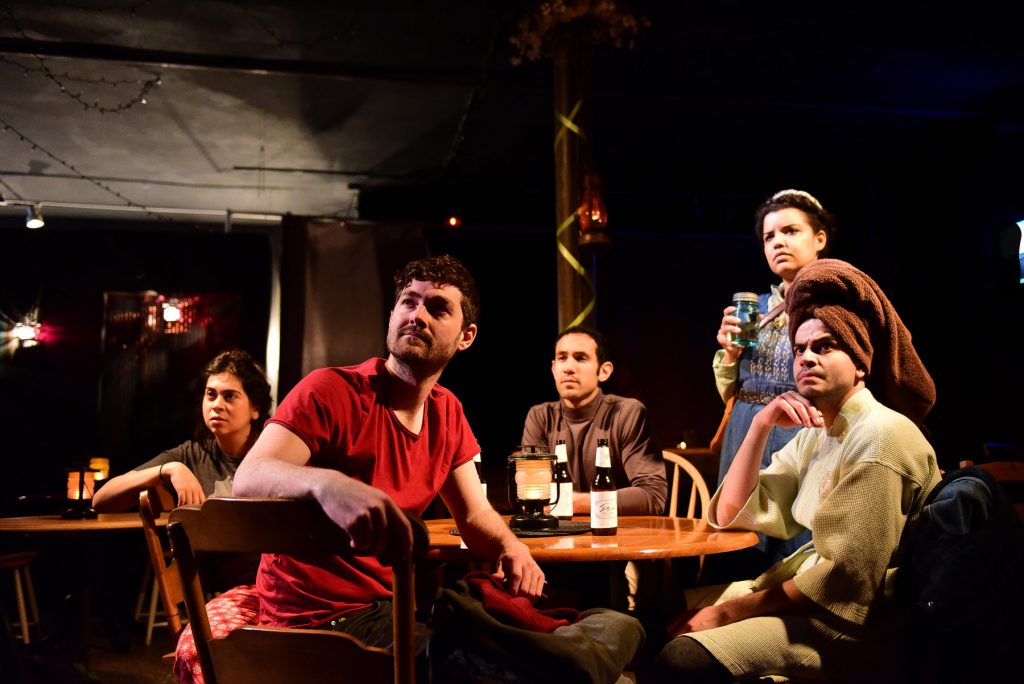 The wanderer’s dream, a haven in the moment of need, dims any disbelief the moment you walk into the 100 Miles Inn of The New Colony’s “Even Longer and Farther Away.” Seated at tables with three or four chairs apiece, the immersion is immediate as waiters and hikers weave between the audience. As one of the keepers begins telling a story about her sister, the tree who fell in love with the sun, my smile grows like a child on a summer beach.

The power of a story at the right time has always been a force for hope. For Appalachian Trail hikers, the greatest hope is that of a warm shower after weeks on the trail. Not, however, for Elliot (Patriac Coakley).

Elliot’s life is falling apart. His girlfriend dumped him and he’s hiking the AT to fulfill his father’s last request: that his ashes be poured on the mountains. Accompanied by his best friend Roy (Omer Abbas Salem), they’re the first to arrive at the inn owned by Trudy (Deanna Reed-Foster). While Roy settles right in, Elliot broods and frets over wasted time.

Making things worse, his estranged half-sister, Alexis (Amanda Raquel Martinez), arrives moments later with her boyfriend Jack (Joe Lino). By intermission, we have archetypes and a structure ready for balladry.

But post-intermission, the setting shifts and the magic is lost. Elliot’s slow redemption that began in the first act is shot as he proves to be an insufferable jackass. Unfortunately, his arc takes too long and comes at the expense of developing all the other characters. Trudy becomes only a trope and Roy’s sassy asides never amount to a full person. Like Alexis and Jack, Roy is only seen in relation to Elliot’s story. Archetypes are revealed to be stereotypes: Trudy as the magical black woman and Roy as the sassy gay best friend.

The shift in setting reveals gaps in logic that mysticism had occluded. Ironically, the show feels less real because of it. (Jay Van Ort)