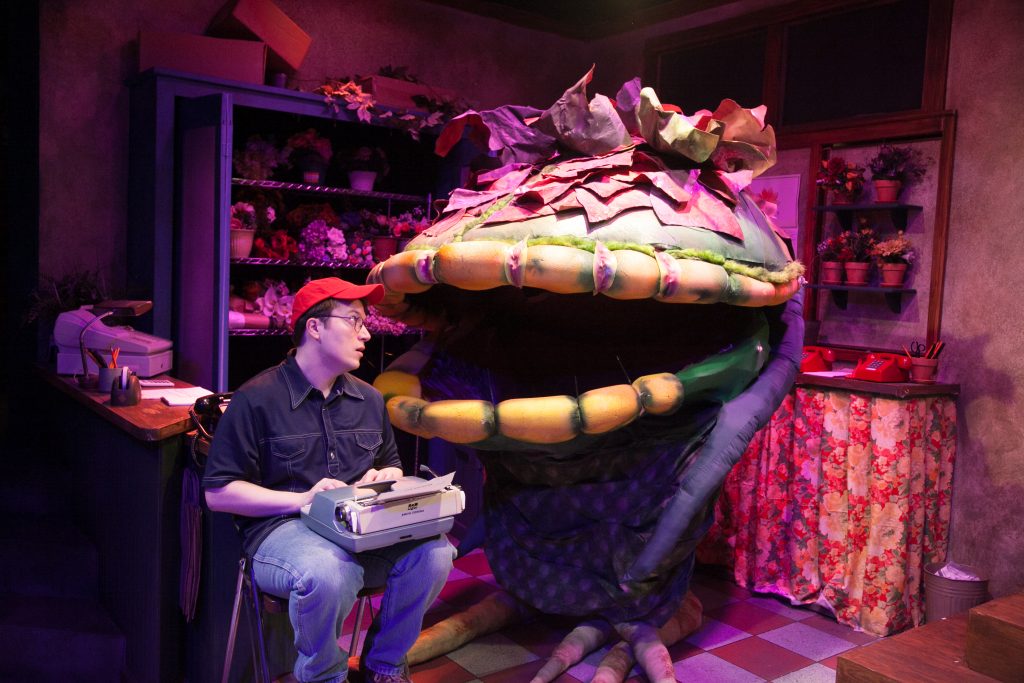 Howard Ashman and Alan Menken’s celebrated “Little Shop of Horrors” is a tunefully amusing musical—and that’s partly what makes it so scary. Telling its story of love and murder through sixties-inspired pop and R&B, “Horrors” challenges audiences by being both heartwarming and cold-blooded; it’s a counter-intuitive musical that the American Blues Theater revives with tender and terrifically tasteless inspiration.

The nebbish Seymour (Michael Mahler) pines for Audrey (Dara Cameron), his dizzy floral shop co-worker, and devises a plan to win her love: Become a success by publicizing his unusual snapping plant, which he calls Audrey II. Once fame and fortune arrive, the growing plant sonorously sings of the raw price for his help. Seymour must now feed his plant meat—the human variety.

Desperate, Seymour starts engaging in moral relativism. To keep Audrey, he must decide who “deserves” to be sacrificed to the voracious plant. The lovesick Seymour essentially makes himself the enabler of a cellulose serial killer.

This version of “Horrors” doubles down on flip cynicism by casting the manic Ian Paul Custer as Audrey’s boyfriend, the sadistic dentist. Custer is so rousingly repugnant in the role that it becomes chillingly easy for Seymour to put him on the plant’s menu.

But what truly distinguishes this “Horrors” is its music, which is the best-sounding version this reviewer has ever heard. The Skid Row street urchins (Camille Robinson, Jasondra Johnson and Eunice Woods), who doo-wop and shimmy-shimmy their way through the narration, create a kind of pop urban opera, and it’s magnificent.

But underneath all the mayhem lies vulnerability and yearning, given sweet voice by Cameron in the signature tune “Somewhere That’s Green.” All she wants is what no one can ever have: The artificial contentment of the TV sitcom family.

But this is a musical, so Seymour and Audrey pursue their dreams despite all odds (and oddities). The difference here is that, with death at the center of things, the ending isn’t going to be happily ever after. That makes “Horrors” all the funnier and scarier: We laugh so hard that we cry. (Michael Amedeo)