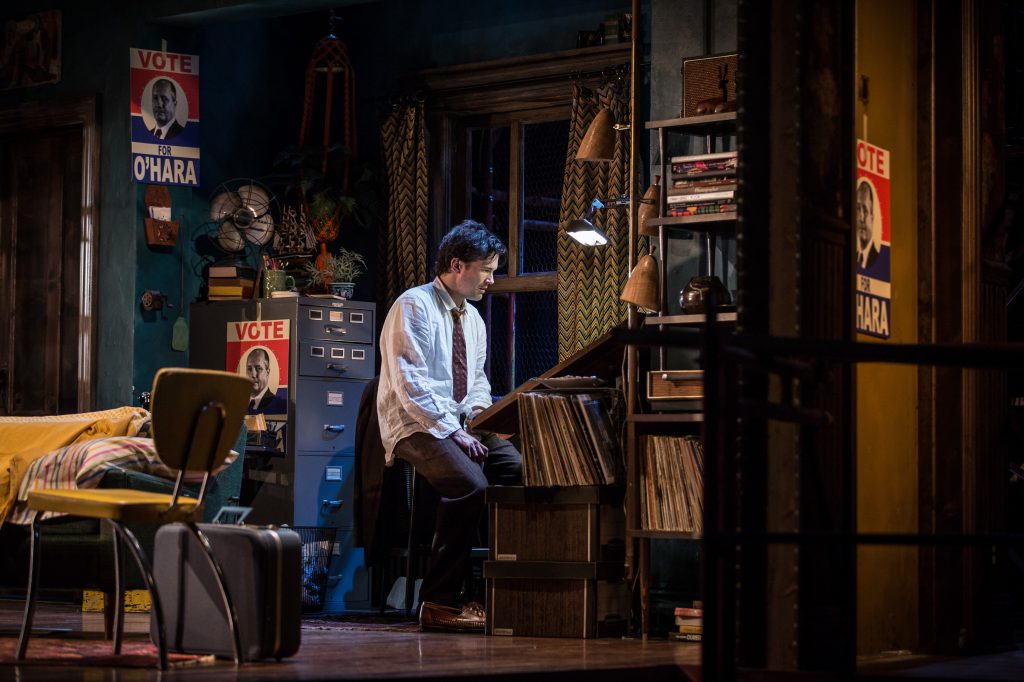 “The Sign in Sidney Brustein’s Window” is steeped in the political, artistic and intellectual soup of the sixties. While Lorraine Hansberry evidently had no love (and little respect) for absurdism, her follow-up to “A Raisin in the Sun” is not interested in the restoration of realism either. Instead it falls somewhere in the shady in-between, a work whose reference points have aged but whose message remains brighter and stronger than ever.

Hansberry’s play concerns itself with principles and the messy business of having them. We meet Sidney Brustein (Chris Stack) as he has just sold his nightclub (which, he insists, is not a nightclub). Unburdened of the weight of responsibility on his bohemian good nature, Sid appears at first affable, wry and intelligent.

Yet his need for a project is an ulcerous drive and the resulting bile overtakes this play’s milieu. Hansberry goes deep into the woods, unafraid of sounding intellectually rigorous and undaunted by the splintering ground of conflict as family and friends become estranged and increasingly hostile.

Hansberry was smart enough to see that there are no easy enemies. There are only effigies and casual traitors. In a political cycle it can be difficult to perceive the difference. Guy Van Swearingen’s Wally O’Hara (for whom the titular sign is dedicated) is a Clinton progenitor, one in a long line of pragmatists in bed with the cronies promising to get out as soon as the election results come back in their favor.

For his part, Brustein is no Bernie Sanders despite what his sister may say about the gumption of the Jews. After all, O’Hara is really Brustein’s secondary enemy, the first being his own ego and pride. While he manages to see the forest for the trees after a perilous encounter with the black hole of moral relativism, the restoration of his vision comes at a terrible cost.

In the play’s final moments, Sidney’s wife, Iris (Diane Davis), admits that what she really wants is for the two of them “to be all of ourselves.” While we may take that “ourselves” to be a reflexive “we,” inclusive and affectionate, it can also be “our selves,” a subtle and astute observation regarding the myriad shapes inside our soul that do not always fit together and yet comprise our being. “The Sign in Sidney Brustein’s Window” posits that we are composite creatures and striving toward the shade of one pillar of absolution or another can only offer temporary respite against the bright heat of uncertainty. (Kevin Greene)