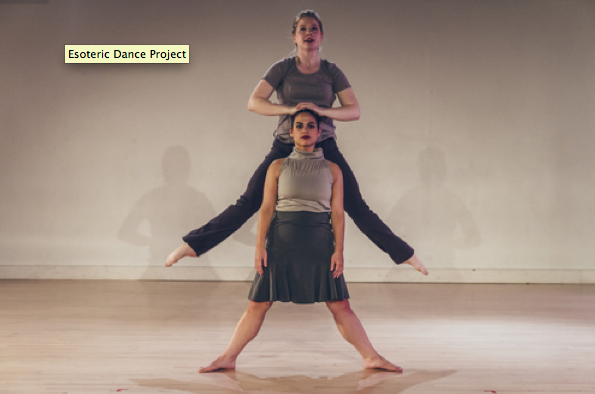 Much of the current offering from Esoteric Dance Project (EDP) centers on notions of the one and the many, the individual and masses, and of the permutations at the intersections between them. Presenting a pair of the latest works from Brenna Pierson-Tucker, co-artistic director of the Project, “Venture” will also feature a new work by Joanna Paul, the first produced under the group’s new choreography mentorship program. Drawing from notions of perception and social dynamics, the stated goal of Paul’s “Hints of Reality” is to examine the role of repression in interpersonal relationships, and the “power surrendered in hiding the most honest part of oneself.” Concerned as well with the effects of environment, “the eye,” and the attendant fluctuations in movement, the choreographic framework suggests a necessary degree of introspection even in the most public of interactions.
It will be shown as a redux of “Translate to 2,” a dance movement study inspired when choreographer Christopher Tucker became fascinated by two dogs whose leashes had gotten tangled and how they were forced to work together in order to move. Taking constraint as a starting point, the group lashes together two dancers who explore the limited range movement imposed by the physical connection of one person to another. What happens to individual identity when people are forced to work together? What happens to bodies when they are forced to integrate their mechanical functions to remain operational? It also raises questions as to the range of operant conditions the body may become habituated to and the effects on the mind those kinds of constraints may impose, even after the bonds have been physically removed.

Most compelling of the program is the third act, “Random Acts of Phrasing,” which integrates elements of performance art into its structure. It draws inspiration from the spatio-temporal work of Trisha Brown’s alphabet cubes, often resembling the fabrication drawings of sculptors, which helped redefine the conceptual systemics of dance movement in the seventies. Coupled with an interest in Merce Cunningham’s investigations of the aleatoric in movement, throughout the evening audience members will be asked to determine music, costumes and section order. This opens the door to the indeterminacy at the heart of EDP’s venture into the unknown at the merger of dancer and viewer and the experience of ever-changing moments that bind them together. (Michael Workman)