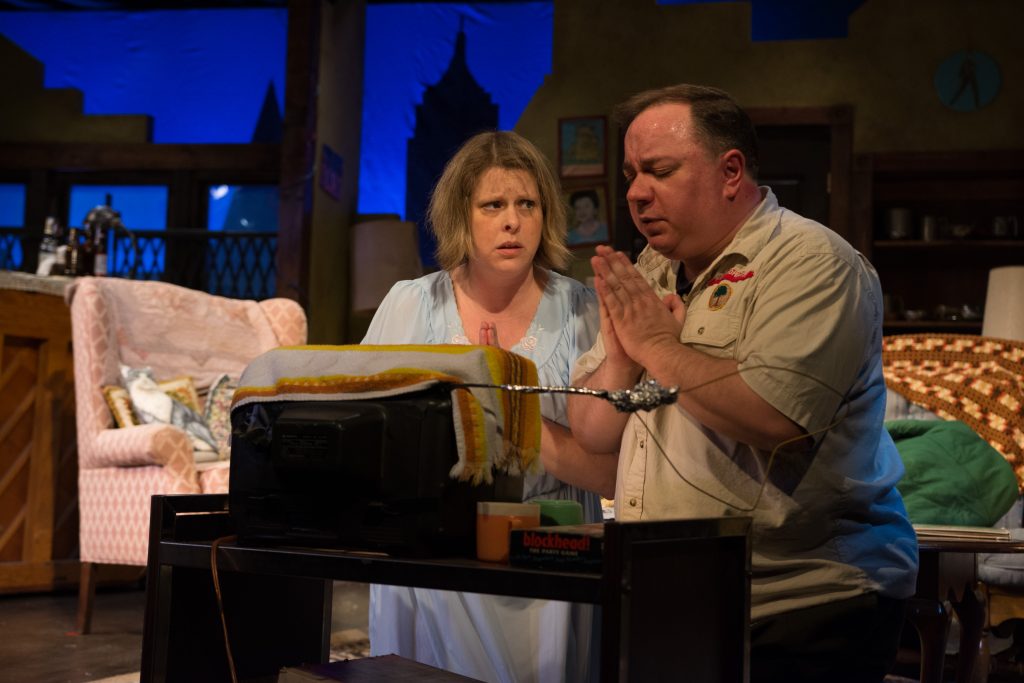 Raven Theatre’s production of “The House of Blue Leaves,” written by John Guare and directed by JoAnn Montemurro, begins almost unnoticed. The live audience chatters over the recorded audience chatter that plays while Artie (Jon Steinhagen) poses himself on a piano far stage left, singing lovely but forgettable tunes. Artie is nervous and unsure; not only is he performing in front of a disinterested fictional crowd, but the live audience itself seems to be unaware that the show has started.

Artie is an average and mostly decent New Yorker who dreams of becoming a famous Hollywood songwriter. His home seems to have an endlessly revolving door. There’s his mentally unstable wife (Kelli Strickland), nicknamed Bananas; Artie’s paramour, Bunny (Sarah Hayes), who is overwhelmingly excited that the pope is in town because she thinks his presence will transform her life; and there’s Ronnie (Derek Herman), Artie and Bananas’ son, who may or may not be suffering from anxieties similar to his mother. A deaf film star (Jen Short), three nuns and Artie’s movie producer friend Billy (Noah Simon) come through as well. All the while, Artie plays his piano, sings his songs and is constantly interrupted or ignored by those around him.

Steinhagen fulfills the role of this nobody beautifully, gradually building up Artie’s desperation through a fear of failure and frustration with his life. Strickland plays an equally pained and sweet Bananas, a woman who is struggling with her mental health and place in her husband’s heart. As Bunny, Sarah Hayes’ faux Queens accent is distracting but fulfills the role.

Guare’s approach to Bunny is gratuitous at times, especially for a character that is meant to be simplistic. Herman’s portrayal of Ronnie also falls flat. Guare missed an incredible opportunity to explore a complex relationship between an ill mother, a distracted father and a son who suffers from neglect.

While the production attempts to capture the tragedy of the play as a comedy, it doesn’t seem like Guare’s text or Montemurro’s direction quite reach that level. Sans label of comedy, “The House of Blue Leaves” stands as a grotesque drama with strong performances delivered throughout. (Danielle Levsky)