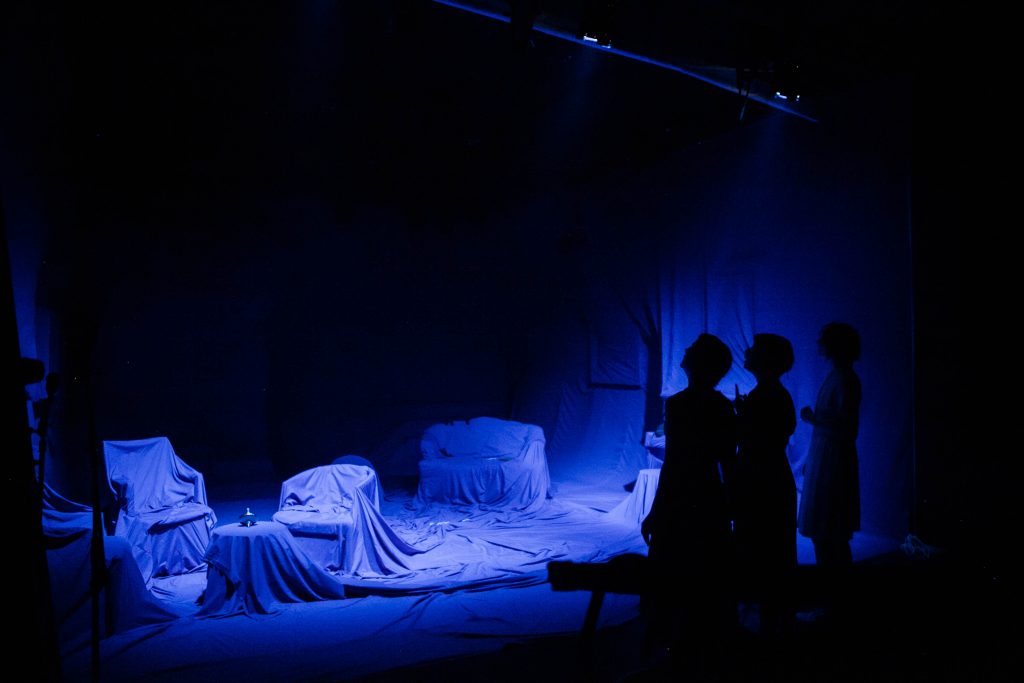 Theatre Y’s “3 Sisters” is both a continuation and adaptation of Chekhov’s play of the same name. Despite beginning at the end, we’re thrust right back into the original, albeit with all characters (apart from the sisters) physically absent though not gone. The stage, with its furniture shrouded in blue cloth, evokes a home so far gone that love and life can only be recalled through muscle memory or, as the adapters would like you to believe, by re-performing actions.

Theatre Y tries hard to provide context for their retakes and interpretations. In addition to the act-by-act synopsis of Chekhov’s play in the program, they also reframe the action of the original within the ghostly room by giving physical presence to other characters by way of light and sound. However, the signals seem mixed. The sisters inhabit a different world from the one we’re seeing and we’re not given a road map for theirs. While we understand the actions taking place, they’re only elucidated through commentary in the program.

“3 Sisters” doesn’t feel like it was meant for audiences. As a devised work, it achieves moments of wonder. But what else? So much of this experimentation never quite connects to an idea. In the program, again, we’re given a precise guide to what adapters Andrej Visky, Dan Christmann and Earl H.E. Hill were looking to explore. However those ideas of action through memory are esoteric and in performance they don’t translate. That is, until you look at the program and an abstract explanation is offered. In some ways, this is a production for intellectuals and academics.

There are accessible qualities in this show. The imagery is often stunning: Irina’s playing cards, her top, Masha’s yellow umbrellas. These moments, while not undercutting the arcane nature of the show, do allow us a brief reprieve. (Jay Van Ort)