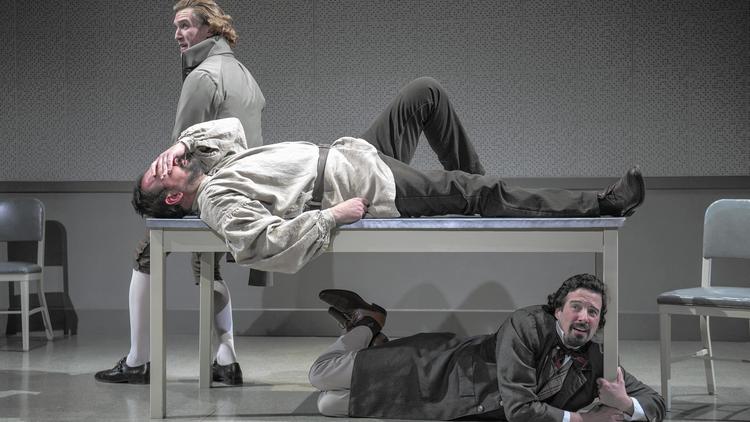 Dialectic—the creative interplay of seemingly opposing positions to produce advancement—is both the theme and structure of Scott Carter’s absorbing and illuminating play. The disputants are none other than Thomas Jefferson, Charles Dickens and a fortunately English-fluent Leo Tolstoy. Posthumously assembled in a small, locked room reminiscent of Sartre’s “No Exit,” the three must duke it out intellectually, seeking to understand why they, of all souls, have been brought together and what they must do to be released from their claustrophobic limbo.

The play’s full title—“The Gospel According to Thomas Jefferson, Charles Dickens and Count Leo Tolstoy: Discord”—answers the first question. In real life, all three geniuses composed their own version of the Christian Bible, each reflecting his own personality, needs and preoccupations. Now, guided silently but firmly by an invisible observer, the ultra-rational and miracle-dismissing Jefferson, sentimental and comfort-seeking Dickens and prophetically iconoclastic Tolstoy attempt to reconcile their clashing perspectives on Christianity and produce some kind of larger truth.

The setup may sound dry and contrived, but the audience—including this critic—were rapt throughout. Major credit is due to Carter’s literate, witty and deeply felt script, which offers not philosophical mouthpieces but rather plausible, three-dimensional characters. Wisely, director Kimberly Senior gets out of the playwright’s way, allowing her gifted cast to address viewers directly, thus drawing us into the lively and passionate conversation onstage.

All three actors—Nathan Hosner as Jefferson, Jeff Parker as Dickens and Mark Montgomery as Tolstoy—are delightful, giving a zesty, feet-of-clay feel to characters who invested much time and energy forging their own legends. Montgomery deserves particular praise for the barely contained intensity of his conflicted count, who reduced the Ten Commandments to five then found he couldn’t follow either set.

While the ending is not entirely satisfying, the show as a whole is burnished to a mellow, thoughtful glow by the playwright’s decades of research and obvious compassion for his magnificently flawed characters. It’s interesting that Carter, a highly successful television writer, has authored this ultimate anti-TV drama, one without a vulgar or stupid moment. “Discord” represents a kind of career antithesis for him, and a movement to a higher artistic level. (Hugh Iglarsh)