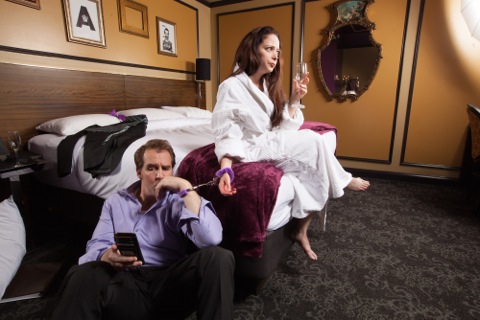 Fortysomething Frank can’t free himself from business—the American religion. He’s so obsessed about his failing sales job that he won’t stop thinking about it even on New Year’s Eve, when he’s ensconced in a too-pricey hotel room with his sassy and provocatively semi-dressed wife, Carla. In an effort to excite, even save, their floundering marriage, the couple intend to spend the night role-playing; Carla will become Gina, a high-priced escort who will demand payment for her “services” in advance.

That’s where Dale Danner’s play “Twisted Knots” begins and that’s pretty much where it ends (except for a manufactured happy ending). The couple (Ryan Kitley and Mary Cross) rarely venture too deep into the role-playing and largely avoid razor sharp, insightful exchanges about their marriage—unlike George and Martha in the classic “Who’s Afraid of Virginia Woolf.” Instead, they vapidly hash out Frank’s job problems over and over again. Frank pontificates about good salesmanship, calls up his bosses from the hotel and then waits all evening for them to call him back. How can he meet his wife halfway when he’s at the beck and call of business?

Out of this depressed proceeding, Cross emerges as the more powerful of the two performers: She disarmingly smolders with resentment over Frank’s obsessive behavior. But Danner gives her little dialogue to express her frustrations. At one point in the second act, Carla does get the opportunity to talk about her job as a nurse and some of its “challenges,” like having to compete with a female colleague who’s “blonde and glamorous.” Is that a compellingly typical workplace challenge for a woman in 2016? Or is that the sexist perception of Danner, who comes to playwrighting from the macho field of commodities trading?

Rather than try to creatively redo the storefront-like stage of the Royal George, this production struck a business deal and used “furniture, fixtures and decorations” from Hard Rock Hotel Chicago. The result is a weird hyperrealism: It’s a bad play in what seems like an actual hotel room. The whole deal should have inspired a new title: “In Bed with Business.” Frank would have loved it. (Michael Amedeo)