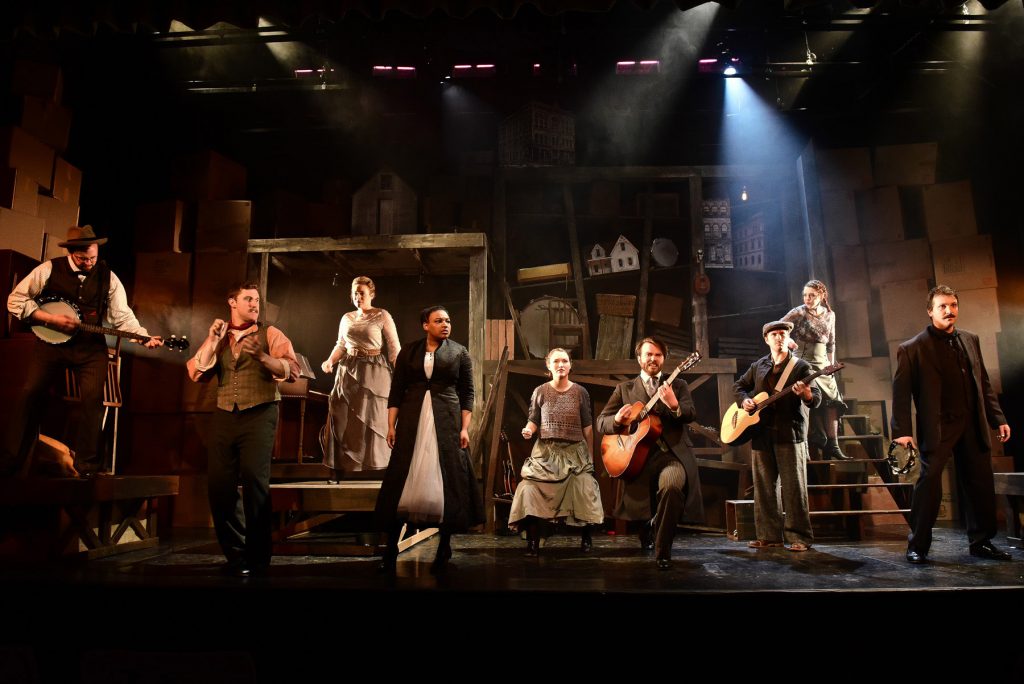 The cast of Haymarket: The Anarchist’s Songbook/Photo: Evan Hanover

The making of a new musical is as daunting as a jigsaw puzzle. The challenge can be ratcheted up when all of the pieces seem to be the same color: a blue sky melting into a mountain stream.

Underscore Theatre Company comes up against this sameness when they tell the timely tale of the Haymarket Massacre. In this election year, with the construct of unionization on some chopping blocks, this is the perfect time to reflect on the history of our country’s unions, surrounded by whispers of socialism and grumbles of anarchism. With a special resonance here in Chicago, we can explore the group psyche of the working-class souls at a time of our country’s great expansion, as contrasted with the growing upper-class struggle to maintain what they believe to be their rightful place at the money table.

But a history is usually a solitary story, with the most complicated lore delivered in a four or five-verse strophic ballad. Underscore stumbles badly when they tell this story exactly as it happened, maintaining every plot point, without a well-developed Everyman character to give the audience an entry point into the action, all conveyed in a single musical idiom, no matter how appropriate. Had they created fresh characters as representatives of their societies and fleshed them out with varied music that matched their needs and dreams, they could have complicated and emblazoned the show’s arc.

The responsibility must be laid at the feet of the creators. Alex Higgin-Houser’s book and lyrics are insufficient to keep the head from nodding. David Kornfeld’s music for this piece, with its Woody Guthrie verse-chorus formula, fails to assist in illuminating the factual characters or the massacre’s revulsions.

The fact that they label this piece a songbook suggests that they understood what they had fashioned and, as is so often the case in the creation of a musical, had to ride the ride until the show hit the stage and either made it there or didn’t. (Aaron Hunt)