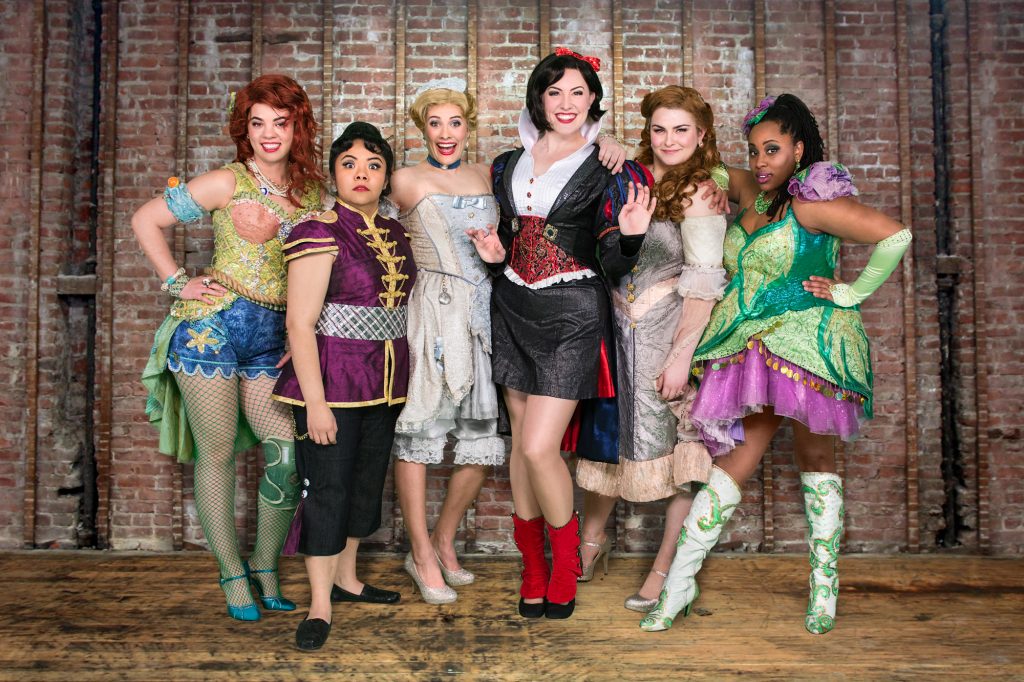 The cast of “Disenchanted!”/Photo: Dahlia Katz

Disney’s princesses are breaking out of their stereotypes and telling the world what they really think of Walt—sort of. “Disenchanted!” with book, music and lyrics by Dennis T. Giacino, aims to break the proverbial glass slipper. With direction by Christopher Bond, there’s a lot of humor in the show, but it’s hard to feel that this musical actually serves its purpose.

The other princesses also tell their tales of woe. Belle (Miriam Drysdale, who also plays The Little Mermaid and Rapunzel) is in a straitjacket after going mad from seeing the inanimate objects in The Beast’s mansion sing and dance. The Little Mermaid is an alcoholic, disappointed that she gave up swimming the oceans in exchange for having legs. Hua Mulan (played by Ann Paula Bautista who also plays Pocahontas and Princess Badroulbadour) thinks she’s a lesbian since she’s the only princess who doesn’t have a prince.

I’m all for breaking stereotypes, but these portrayals don’t actually accomplish that. There’s nothing wrong with a woman who doesn’t have a guy. Mulan could have been the princess that teaches the other princesses how to be self-reliant rather than questioning her sexuality because she’s single. The only princess whose story isn’t made into a laughing matter is Pocahontas who laments because her story wasn’t told truthfully since she was a real person.

The princess who kissed the frog (Uche Ama) is the last princess to get her song and there’s no clear reason why she couldn’t have been more integrated into the show.

All of the actresses give strong performances. I also appreciate that the cast is all female. However, while watching the show, I kept wondering why these characters were mostly written more like caricatures rather than strong women. An opportunity was missed. (Mary Kroeck)