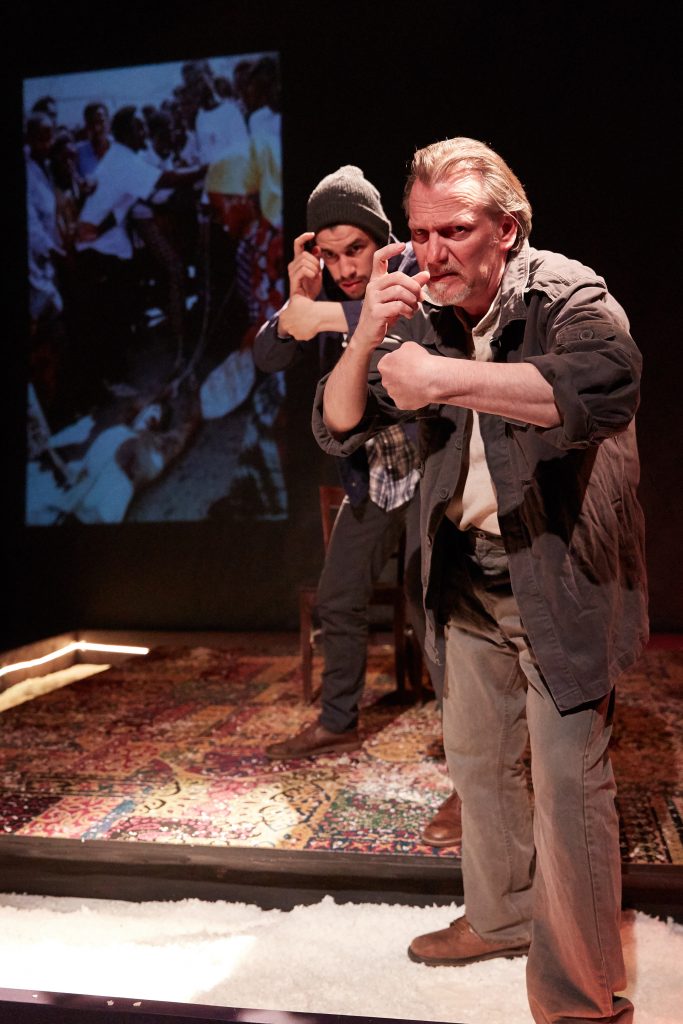 “Body of an American” begins in 2007 with playwright Dan O’Brien listening to photojournalist Paul Watson being interviewed by Terry Gross on “Fresh Air.” Depressed and anxiety ridden, O’Brien feels an immediate kinship with this accomplished but clearly damaged older journalist. O’Brien emails Watson which begins a correspondence that spans several continents and wars. Although quick to discuss his insecurities, Watson is remarkably elusive about meeting O’Brien in person. O’Brien for his part avoids any mention of his family and their role in his lingering depression. Eventually, in a small town deep in the Canadian Arctic, they do meet. Together they pop antidepressants while waiting out an epic blizzard.

Playing the roles of Watson and O’Brien are Don Bender and Ryan Hallahan. Both actors fill the stage with the necessary presence and range to play not only the lead characters but everyone from teenage Inuit girls to Afghan warlords. Under Jason A. Fleece’s direction, these talented actors smartly bounce off one another while slowly revealing the source of their mutual need to confess and be understood. The pacing is also well measured and the characters develop at a very natural rate.

Toward the end of the play, O’Brien reveals that he, like several other reviewers, found Watson’s war memoirs pointless. His books are described by O’Brien as being little more than graphic war scenes interspersed with pithy statements equating war with inner turmoil. “The Body of an American” neatly avoids this trap by taking the audience to places they would normally avoid (like genocidal Rwanda) but then subtly stressing how these experiences change those witnessing the carnage.

There are no grand epiphanies or healing moments here. When Watson hears a dead soldier telling him that there is a price to pay for photographing his desecrated body, those ghostly words tighten like a noose around his neck. Later when meeting that soldier’s brother, the sum of that experience is reduced to Watson being told that he was just doing his job. Watson is comforted by those words and the grip around his neck subsequently loosens. But it never completely lets go. (Noel Schecter)