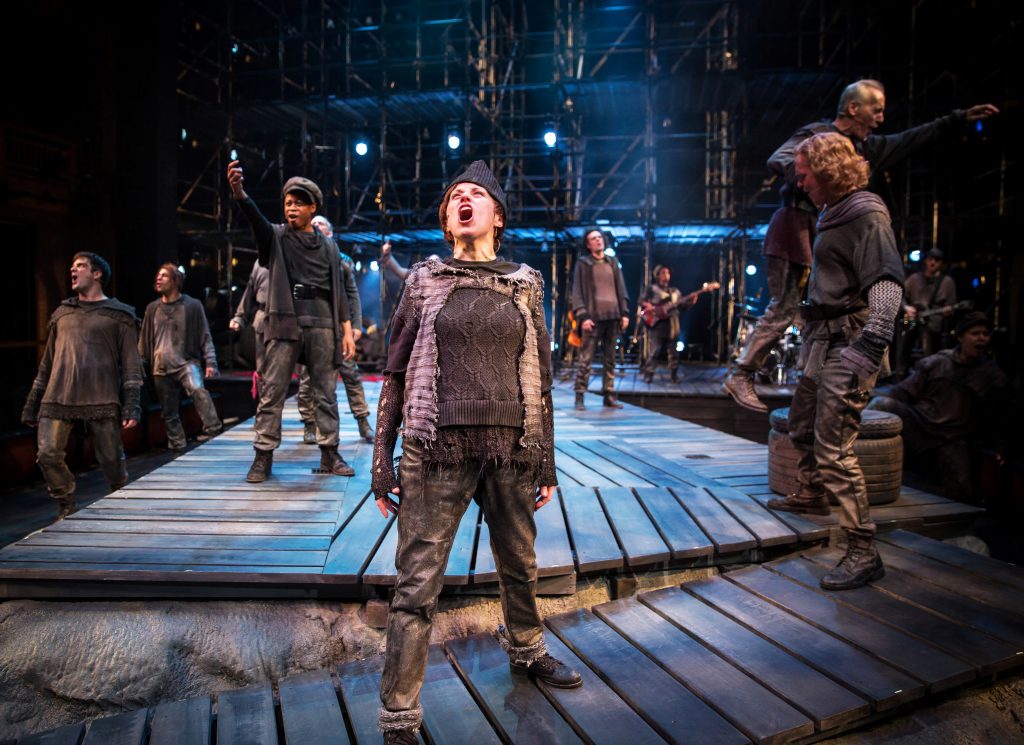 The cast of “Tug of War: Foreign Fire”/Photo: Liz Lauren

From a purely economic perspective, Chicago Shakespeare Theater’s “Tug of War: Foreign Fire” is a pretty good deal. With a running time equivalent to three full-length plays (sans roughly seventy-five minutes worth of intermissions), the first half of Barbara Gaines’ newly adapted saga is itself a trio of Shakespeare’s history plays strung together chronologically. While it falls squarely within the trend of endurance theater (whose exemplars range from stately to fantastical), “Tug of War” has a dad-rock energy to it: out of touch and overcommitted.

Given the gargantuan proportions, it’s more effective to discuss means rather than extremes. The overall quality of acting skews excellent, helped along by veterans like Larry Yando, David Darlow and the underused Karen Aldridge. Though the absence of strong women is a blame that may be laid at the feet of the Bard, Gaines nevertheless does little to address the deficit in these testosterone-fueled war stories.

Despite marketing materials that suggested a rock ‘n’ roll romp, the onstage band is at their most useful when providing atmosphere. The musical interludes—many of which are sung by members of the cast—are often an overtly deliberate translation of Shakespeare’s delightfully duplicitous language into something more comparatively basic. The original tunes range from ballads to Pogues-like pub rock and thrust into sharp perspective pop music’s limited means of communicating deep emotions.

While these songs are generally uninspired and (in that regard) in keeping with these proceedings, Gaines and company still felt the need to insert shots of the gallingly contemporary as in the case of P!nk’s “So What” and Pink Floyd’s “Us and Them.”

To quote a generation generally disdained by the theater: I can’t even.

What hampers this production is that it is simultaneously too genuine and not genuine enough. It is calculated yet indulgent and unable to justify its own existence. No doubt there is a real value in experimentation and you have to hand it to Chicago Shakes for taking a big risk. Yet it becomes clear quite early on that this production puts a greater emphasis on “big” than “risk.”

In short: “Tug of War: Foreign Fire” is “All Our Tragic” for day-trippers and suburbanites. Like an ineffectual ruler, it offers little while expecting a great deal. (Kevin Greene)