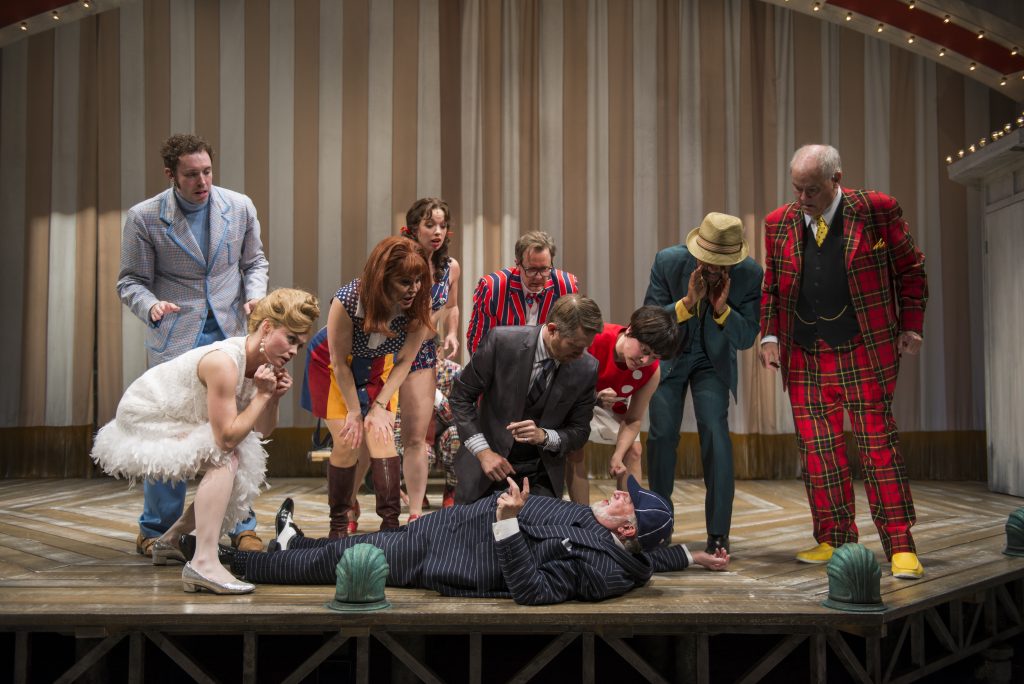 The cast of “One Man, Two Guvnors”/Photo: Michael Brosilow

The integration of improvisation, scripted text and fourth wall breaks is surprisingly smooth in Court Theatre’s Midwest premiere of “One Man, Two Guvnors” after its successes in London and on Broadway. Based on eighteenth-century Commedia dell’Arte classic “The Servant of Two Masters,” Richard Bean’s script incorporates satire, slapstick and music to create a consistently amusing farce.

The play is set in the coastal British town of Brighton in 1963 and opens with the prospective marriage of dimwitted Pauline Clench (Chaon Cross) and “actor” Alan Dangle (Alex Goodrich). Pauline’s father, Charlie “The Duck” Clench (Francis Guinan), is pleased with this arrangement because his daughter’s former betrothed, gangster Roscoe Crabbe, is dead, and Alan’s father, Harry Dangle (Ross Lehman), wants an advantageous marriage for his overly sensitive son.

That’s when Francis Henshall (Timothy Edward Kane) storms in on behalf of his guvna, Roscoe—who is actually dead and being impersonated by his twin sister Rachel (Elizabeth Ledo). Francis quickly gains another guvna, Stanley Stubbers (Erik Hellman), who also happens to be Roscoe’s murderer and Rachel’s lover. All the while, Francis really wants a good meal and a good woman: namely Dolly (Hollis Resnik), the bookkeeper of “The Duck.” Chaos, as you would expect, ensues.

Newell’s selection of A-list Chicago actors makes up for lulls in the first act. In particular, Kane’s dynamic expressions captivate the audience in especially challenging scenes where he must work within the script then abruptly change to sequences where he improvises with and incorporates the audience. He’s a bastion of improvisation. Ledo, Resnik and Goodrich also offer standout performances, demonstrating a high caliber of comedy and wit that flows naturally.

Grant Olding’s music falls short in the first act, with its forgettable ditties, but dazzles in the second, particularly the song immediately following the intermission that incorporates the musical prowess of ensemble members and lead cast members alike. Resnik’s delivery of her solo number “Strung Out Dolly” also shines.

The highlight of the comedy is director Charles Newell’s deliberate choice of incorporating the actors as musicians, allowing for a natural flow between scripted text and the oft-broken fourth wall. (Danielle Levsky)

3 Comments
Inline Feedbacks
View all comments
Elementary High School Comedy: A Review of The Power of Prom at The Annoyance Theatre | Danielle Levsky

[…] wrote a theater review for Newcity Magazine on The Power of Prom at The Annoyance Theatre. Click here to read my […]

Strays From the Righteous Path: A Review of The Divine Sister at Hell in a Handbag Productions | Danielle Levsky

[…] a theater review for Newcity Magazine on The Divine Sister by Hell in a Handbag Productions. Click here to read my […]

A Who’s Who Whodunit: A Review of One Man, Two Guvnors at Court Theatre | Danielle Levsky

[…] wrote a theater review for Newcity Magazine on One Man, Two Guvnors at Court Theatre. Click here to read my […]