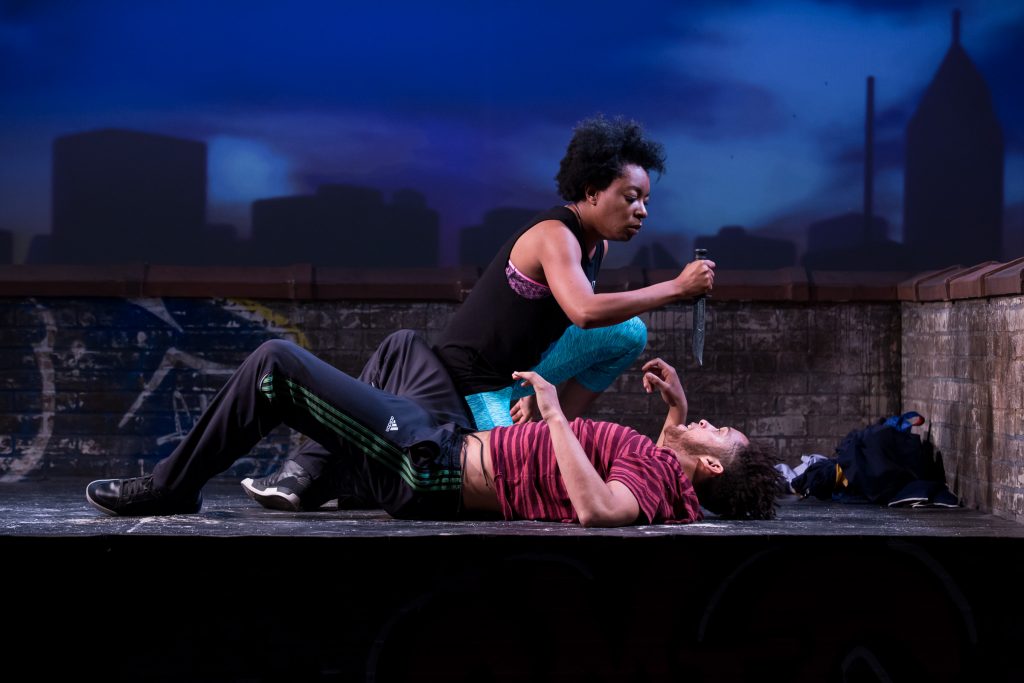 There are opposing impulses at war in Ike Holter’s “Prowess”: talking shit and talking about shit. The result of this conflict is the feeling that Holter has written two distinct plays. While not exactly oil and water, the two styles don’t always integrate successfully. The one involves entertaining, bit-heavy quipping. The other applies the brand of expositional melodrama familiar to anyone who’s watched a Marvel movie in the last five years. A psychological thriller that uses the tropes of action movies while also turning them on their head, “Prowess” aggressively attacks our culture of complacency while offering a portrait of vigilantism grounded in social realism.

Holter’s distinct style—multiple voices speaking simultaneously, often at twice the speed of casual conversation—is an undertaking in its own right. The play’s use of violence serves as a physical manifestation of Holter’s athletic verbiage, which frequently pulls no punches. Cast members Julian Parker, Donovan Diaz, Sydney Charles and Andrew Goetten (who took over for Andrew Burden Swanson after an unrelated eye injury days before opening) are put through their paces in extended fight sequences and workout routines that make the opening credits to “Do The Right Thing” look like Sunday morning stretches at the senior center.

As a genre exercise, Holter has constructed an impressive and immersive world with “Prowess.” That being said, much of the emotional crux of this play relies on characters who are not quite fully developed. Holter’s play asks for the kind of suspension of belief that, while common in the multiplex, is difficult to achieve when your audience is actually in the room.

Taking place exclusively on the South Side, Holter is not afraid to acknowledge the insidious “not my Chicago” attitude that further partitions our already deeply divided city. If you’re fortunate enough to live between Rogers Park and Bronzeville (and east of Humboldt Park), it is entirely possible to mean well, do little and feel pretty okay about it. Yet Holter’s conclusions about what exactly any of us are supposed to do about the problems plaguing our city are, if not fuzzy, at least purposefully inconclusive. (Kevin Greene)