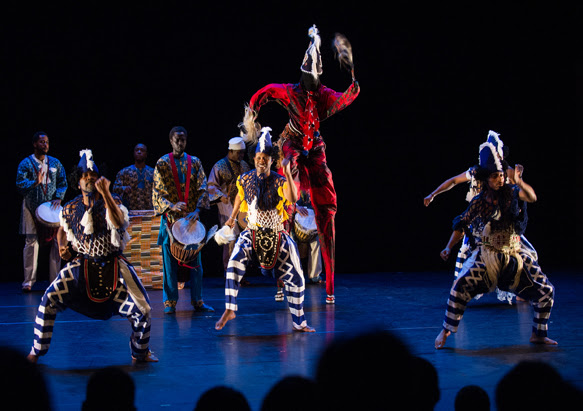 Chicago Human Rhythm Project’s performance series “Stomping Grounds” is wrapping up with a grand-finale performance at the Auditorium Theatre June 4, in which five of the six participating companies—Muntu Dance Theatre, Ensemble Español Spanish Dance Theatre, Mexican Folkloric Dance Company, Trinity Irish Dance Company and CHRP’s own tap company BAM!—will share the stage for a clapping, tapping, thundering conclusion to a month of free performances around the city (Japan-based Tsukasa Taiko performed at the Garfield Park Conservatory as part of the festival, but couldn’t join the finale performance). This is the second year CHRP has organized “Stomping Grounds” and the concept is one of intra-city cultural exchange: each company, grounded in a distinct tradition, hosts two other companies on their home turf, as well as visits two other companies as guest performers. All shows are free and the festival culminates in a finale with all participants at the Auditorium Theatre. Based in generosity and access, celebrating both diversity and the rhythmic heart that beats within us all, the series was a resounding success. So much so that CHRP pulled culinary and visual art traditions into the mix this year, with food trucks parked outside of “Stomping Grounds” events and ethnic arts on display within. Perhaps the most inspiring part of this year’s program is the one unseen by audiences: the six “Stomping Grounds” companies visited sixteen elementary schools and presented a cross-cultural dance and drumming lecture/demonstration entitled “We All Got Rhythm,” that got kids clapping, drumming and foot-pounding along. Teachers then had follow-up training on how to continue incorporating rhythmic arts into their curriculum. “All you hear is the bad news,” says Lane Alexander, founder and executive director of CHRP. “The schools we’ve been in so far are wonderful learning environments, engaged kids. And the subliminal message we deliver is of tolerance and social reconciliation and peace.”

Next year, Tsukasa Taiko will join the finale and Alexander hopes to incorporate more non-dance percussion into the festival (CHRP has long emphasized that they promote all rhythmic arts), create a joint number for all the groups in the finale, and hopefully add one more performance at the Auditorium Theatre. For now the big final show is one night only.

“Yes, it’s a percussive dance festival,” Alexander says. “But at the heart it’s about this group of artists coming together to say yes, we can live together, we can work together. Let’s celebrate those things we share. Even as we settle the things that keep us apart we have got to focus our energy and time on working together. Anyone who wants to help further this in the communities and bring it to theirs is welcome to join us.” (Sharon Hoyer)