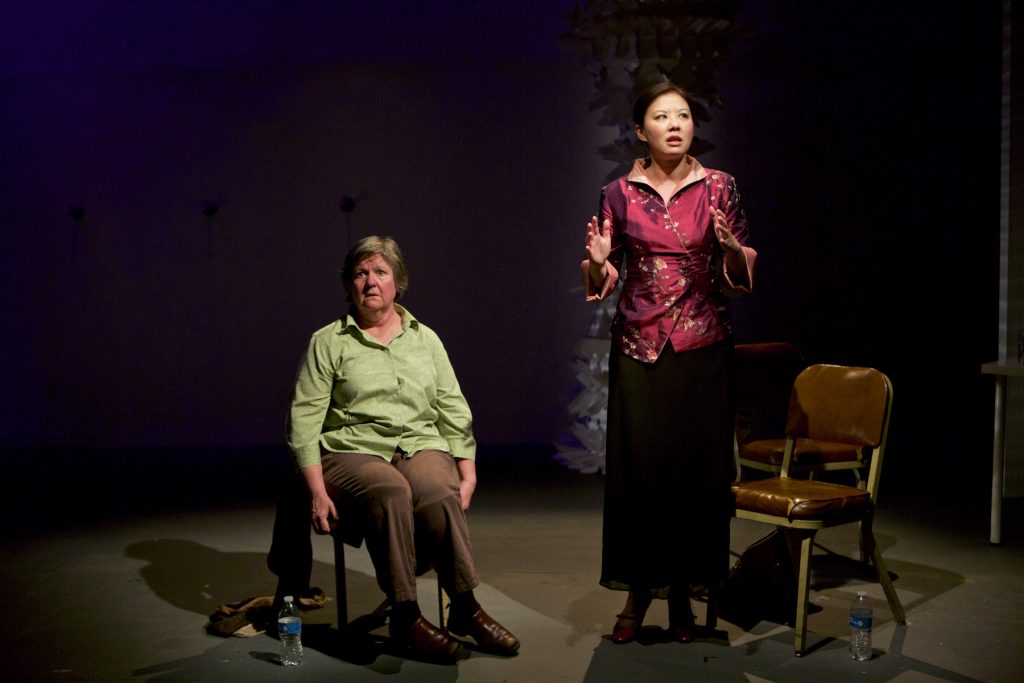 At one point in Christopher Chen’s “Caught,” currently enjoying its Chicago premiere courtesy of Sideshow Theatre Company, a character states that what matters in communication is not so much objectivity as intention, as even a fact-filled account of a situation may still be misleading if the author fails to challenge underlying agendas. That critique can be applied with equal force to this clever but facile mind-game of a play, which collapses into a smug, audience-baiting vacuity.

Divided into four parts—two conventional theater scenes and two mock art-gallery talks—this intermissionless show begins with a speech by Lin Bo, ostensibly a Chinese dissident artist who describes his oppression at the hands of his government. But he is not what he seems and the remaining scenes do not advance his story so much as deconstruct it. Chen and director Seth Bockley give us a performance-art view of politics and human suffering, full of attention-craving spectacle, signifying little.

Wasted are fine performances by Ben Chang as the trickster Lin Bo; Helen Young as Wang Min, his pretentiously sadistic partner in crime; and Ann James as the hapless Joyce, the victim of their motiveless cruelty. Bob Kruse is superb as the cartoonishly menacing New Yorker editor who interrogates Lin Bo about the authenticity of his account, declaring that “lies are like cockroaches—for every one you see, there are a hundred in the walls.”

Unfortunately, the same is true of fashionable postmodern clichés, as when Wang Min informs us that we cannot really know anything about foreign cultures because every attempt to tell others’ stories reveals “only the architecture of our own rules.” Chen’s script raises some potentially interesting questions about propagandistic media and public credulity. But the play treats ambiguity as an absolute and final truth, which conveniently frees us from the pain of empathy and the responsibility of taking action.

Both Lin Bo and Wang Min are presented as protégés of the humorously named “Yu Rong,” creator of conceptual art projects that exist only in their description. Yu Rong’s last piece is an expressed desire for self-negation. “Caught” is true to that wish, retreating from the world into a conceptual cul-de-sac more confining than Lin Bo’s phony prison cell. (Hugh Iglarsh)