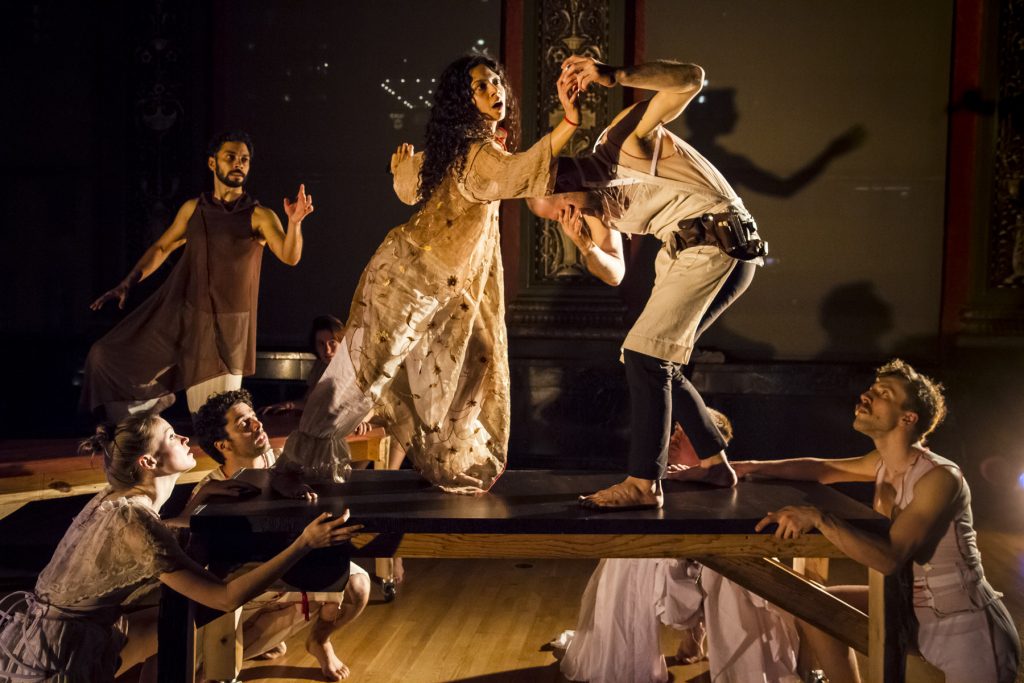 What’s the cure? Is it a medication? Is it a solution? Or is it only palliative, a substance or beautiful enough idea that maintains our breath for one moment longer? Is it a love song, a love letter or honest-to-goodness love?

But this is Walkabout. They don’t really do “easy.” The subject matter (the interstitial spaces between life and death and the forces pulling us in either direction) isn’t easy. And the physical dynamism they maintain through the performance? Nope, still not easy.

“The Cure” has a lot happening: it’s deeply toned, the moods the ensemble defines are palpable and the madness swings wildly between love-hazed hallucinations of honeysuckle bushes and TED talks. The collage pieced together by the cast and filtered by director Kendra Miller offers enough narrative strands to allow for very distinct “plots” to be devised by the audience. Walkabout facilitates participatory storytelling via their ambiguity as well as their clarity.

In that sheer mass though, the focus and ambience splinters easily. With its hour runtime, “The Cure” opts for having multiple events transpiring at the same time as opposed to cutting and condensing. Again, this allows for greater audience agency, but the most coherent and visceral instances occurred when the images were juxtaposed rather than slap-dash collaged.

Events of note: entering into the space, the ensemble singing “Crazy on You” and Cooper Forsman performing as a snake-oil doctor who doesn’t like to talk about cost. In some ways these moments allow us to enter the secret places where this ensemble goes when they’re creating. The audience is a lucky observer, not as much a necessity as in other pieces of theater. In that way, they don’t always hit the mark. But that’s not really the point here.

The purpose isn’t so much to create something digestible and coherent as much as forging an experience, playing in a process and allowing us to draw our own conclusions. In that way, “The Cure” is a huge success. (Jay Van Ort)