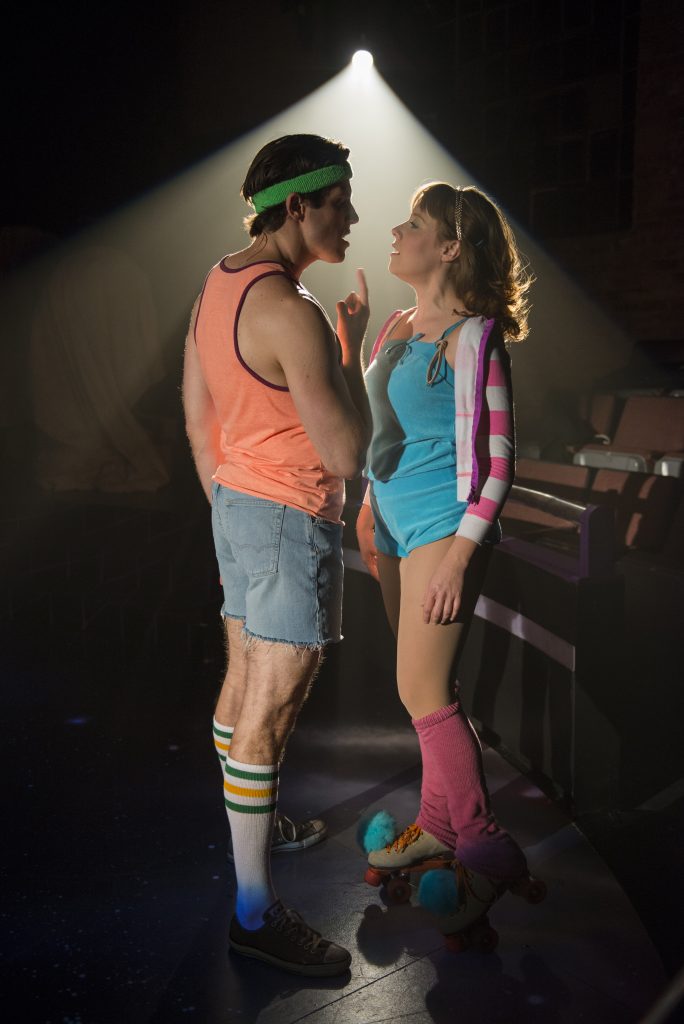 It may come as a surprise that American Theater Company’s production of “Xanadu” is actually significantly less over-the-top than you might reasonably expect from a stage adaptation of the 1980 cult comedy of the same name. Of course, for a gender-bending show that concerns itself with Greek goddesses visiting a clueless, but apparently brilliant, mortal in order to assist him in fulfilling his destiny of opening an art-centric roller rink, “over-the-top” is subject to relativity. ATC’s version hits its peaks when it sheds the veneer of cheeky self-reflexivity and embraces the pure spectacle of camp.

In one of the more versatile spaces in our city, director Lili-Anne Brown (with scenic and lighting designers CoCo Ree Lemery and Michael Stanfill) transforms ATC’s stage into a vintage roller paradise complete with requisite disco ball, DayGlo and smoke machine. Populating this kinky canvas are Sonny (Jim DeSelm), the goddess Kira (Landree Fleming) and a cheery, queery ensemble.

Delight is in the details in “Xanadu.” The offhand asides and ad libs are often funnier than the jabs at the culture of theater, characterized here as the perpetual loser of the art world. The same goes for the bit parts: James Nedrud’s skating-averse Hermes and Aaron Holland’s Zeus, equal parts Prince and Titus Andromedon, are equally unforgettable.

DeSelm and Fleming are graceful in their leading roles. Fleming is a triple threat on wheels. DeSelm’s gospel tribute to his divine muse is this show’s most outrageous moment but succeeds through the joy of the ensemble.

“Xanadu” does get a little awkward at times. In an ideal world, this show would be staged in the round. As it is, most of the transitions are smooth but given that part of the set is elevated and in a far corner, comings and goings can sometimes be laborious. The musical components of the show offer little beyond spectacle and occasionally feel pointless or even indulgent beyond the measure of bad taste that this musical is simultaneously embracing and poking fun at.

Not quite a stately pleasure dome, “Xanadu” nevertheless strikes a balance between sincerity and extravagant irony. (Kevin Greene)