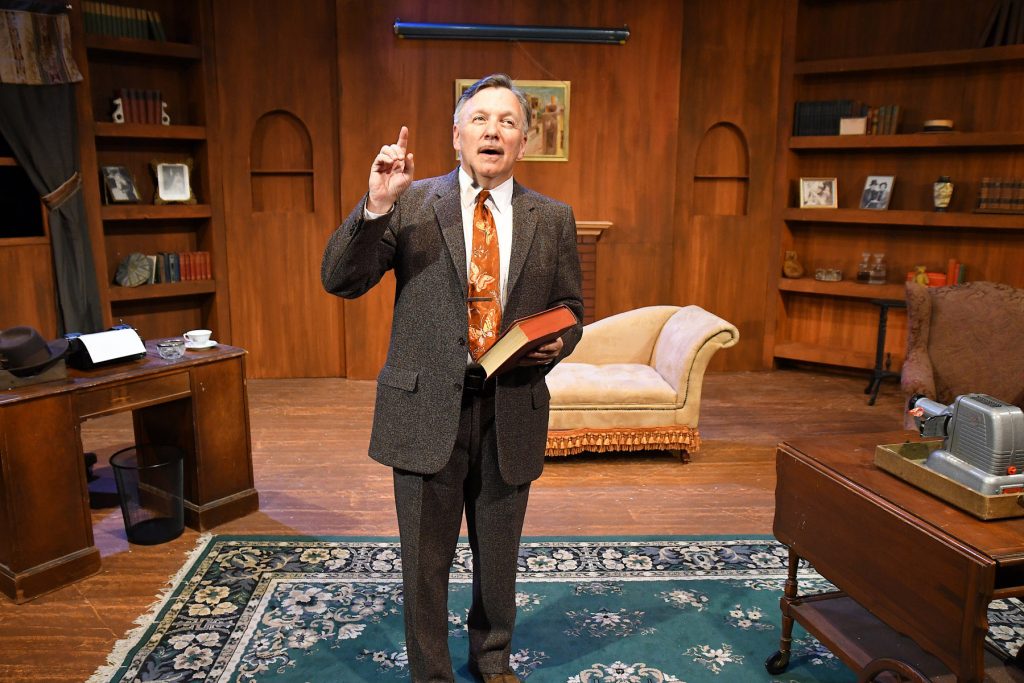 In his preface to Ben Hecht’s novel “Eric Dorn,” Nelson Algren writes that “No American yet has written a novel this good yet this bad. This is the one work of serious literature we have that by the same token stands as a literary hoax.”

This comment cuts to the heart of “The Ben Hecht Show,” a one-man performance directed by Dennis Zacek, about the late writer who grew up in Racine, Wisconsin, cut his teeth as a reporter in Chicago and went on to fame as a playwright and screenwriter. Written and performed by local scribe James Sherman, the play is an odd mix of insight and confusion, depicting Hecht’s confrontation with something beyond his ability to understand or deal with.

That event is the Holocaust, which startled Hecht out of his plush existence and back to his roots as the child of Russian Jewish immigrants. The play is set in 1943, as the death camps grind away and the world does little to protect what’s left of European Jewry. The desperate Hecht stages showbiz pageants in a vain attempt to arouse public opinion, then turns his energy to fundraising for right-wing Zionist militants.

The Ben Hecht we meet here is a man obsessed with anti-Semitism to the exclusion of all else. We never discover whether Hecht had a wife or children or friends. What we do learn about are his enemies, as he charts his movement from religious indifference to a chauvinism that views the Jews as sole keepers of the house of intellect and gentiles as resentful outsiders. Hecht’s analysis of anti-Semitism (as presented in his memoirs, which have been adapted by Sherman) is sharp and cogent. But his tribalism trumps any humanism and his efforts seem rooted more in egotism than compassion.

Sherman’s portrayal of Hecht feels like a performance of a performance, as the name-dropping celebrity flaunts his wit and righteousness onstage, while never revealing himself. Sherman’s combination of flat, affectless voice and florid gesture gives a note of effortful insincerity to the role, which may well be the appropriate choice.

Seeking an identity as a Jew, Hecht became an ardent anti-anti-Semite. But hatred is a fragile foundation and the Hecht we see here is so enmeshed with his enemies that he comes close to merging with them. (Hugh Iglarsh)