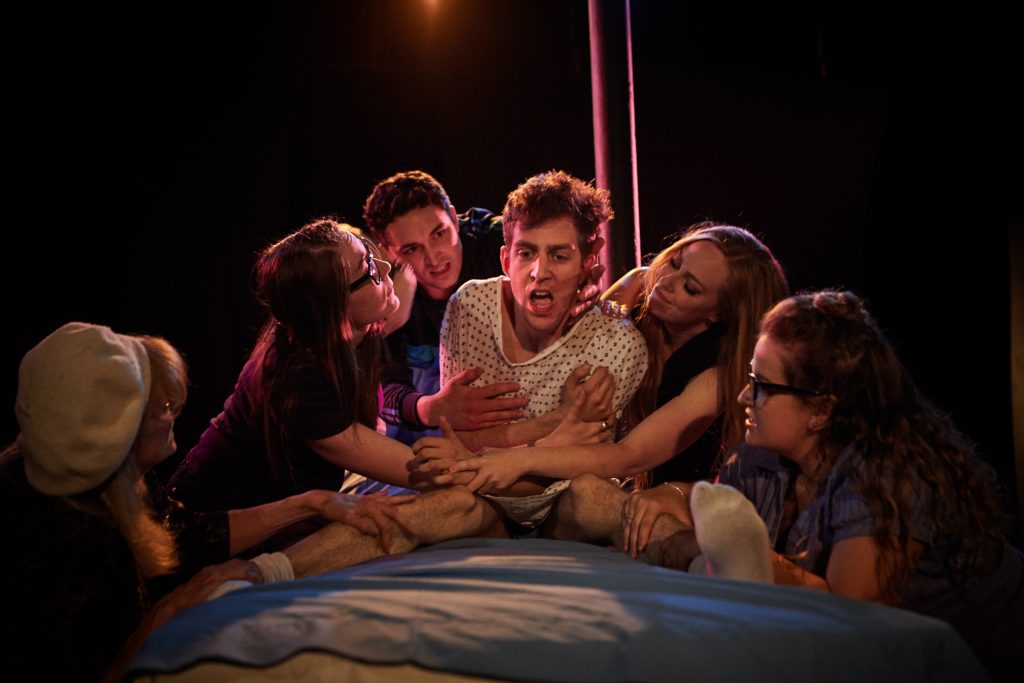 There is no such thing as love in this world. Poets, more than anyone, know that this is true, because they invented it, and, capitulating to the inevitable, called themselves realists in order to give themselves license to mediate the dismantling of their invention. Homophobia is just a byproduct of this anxiety about love, this need to assert, define and then ravage that darling of human civilization, that mirage of no substance, that sick paste that barely holds together the twin oppressions, one spiritual, one legislative, of monogamy and marriage. Vladimir Zaytsev’s “Out of the Blue,” presented for the first time in the United States in a translation by Tatyana Khaikin and Robert Duffley, is a monolithic examination of the Western obsession with love through the lens of homosexuality and homophobia, executed with lighthearted, penetrating skill by Organic Theater Company.

Jonathan Edwards wrote in “Sinners in the Hands of an Angry God” that the unconverted “walk over the pit of hell on a rotten covering.” Judith Butler wrote in the “The Psychic Life of Power” that the natural subject is a homosexual, stemming from the desire to mimic and possess the parent of the same sex but that this desire is perverted by subjugating social customs, resulting in the tyranny of heteronormativity. These and other attempts to explain the sickness that plagues the blind consumers of a palatable fantasy underlie the series of allegories that make up “Out of the Blue.”

As the Boy, Will Burdin is a sweetly confused waif caught in the torrents of his emotions, bad romances with nerdy Vika Malakhova (Amy Powell) and sexy Andrey Averyanov (Adam Zaininger) and the absurd and horrifying responses of his family. Laura Sturm, as overattentive, enabling Mama and Bryan Wakefield, as choleric, hypermasculine, militant (of course) Papa, embody a perfect storm of horrendous parenting, backed by cuckoo, art-obsessed Babushka (Julane Sullivan) and hetero-rights-activist/whore (ahem, love goddess) Viola (Bethany Mangum).

Strains of Tchaikovsky’s “Swan Lake” fill the stage, smoothing the way for all the black swans lurking at the edges of the pond. (Irene Hsiao)