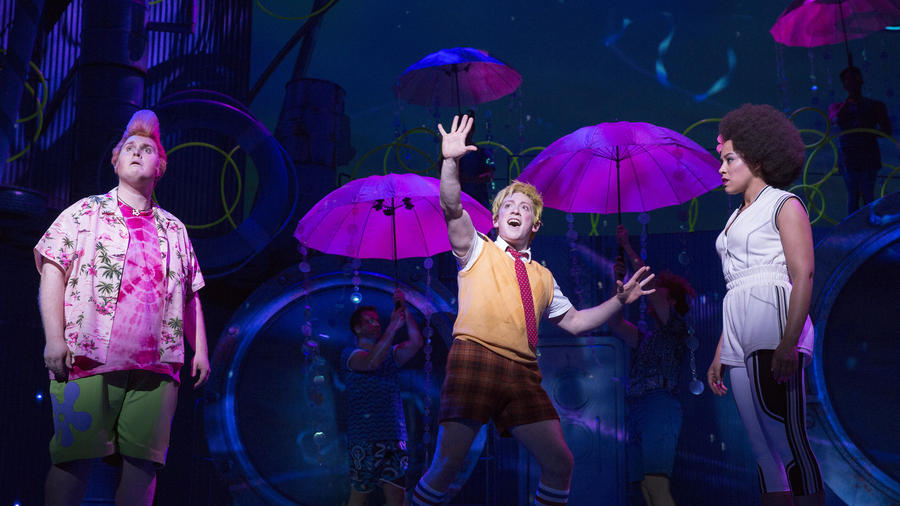 The creators of SpongeBob SquarePants, the naïve and dutiful kitchen sponge who lives under the sea, struck while the irony was hot—in the cartoon’s early years at the turn of the century. Back then, the show’s humor had a hip, “square-is-cool” edge that appealed to adults and precocious kids alike. Then came worldwide success and the producers started watering SpongeBob down to appeal to an even wider audience. Two bloated big-budget movies inevitably followed, and now a live-action musical is surfacing on its way to Broadway.

The bad news is that “The SpongeBob Musical” retains only a little of the cartoon’s initial edge: Like the movies, the play seems to be a capitalist tool designed to inflate the profits of corporate producer Nickelodeon. But there’s also good news: As capitalist tools go, this one is creative, energetic, musically infectious and highly entertaining. Even for more discriminating viewers, it’s a good, if occasionally guilt-inducing, waste of time.

The marvel in the musical consists of the way it reworks some of the cartoon’s animated excesses into live action. An athletic, incredibly loose-limbed Ethan Slater portrays the title character. In his red tie, prim yellow sweater vest and spiked blond hair, Slater literally reshapes himself into Spongebob as he sings of his character’s travails: job discrimination from greedy boss Mr. Krabs, a deteriorating relationship with dear friend Patrick and the apocalypse that’s coming to hometown Bikini Bottom. Somehow and some way, Slater’s ever-optimistic SpongeBob will find a way to transform himself into the hero.

Despite his central role, Slater does not participate in the play’s two showstoppers: They belong respectively to Carlos Lopez as Mr. Krabs and Gavin Lee as the four-legged, bass-voiced fatalist, Squidward. Lopez luxuriates in greed as he sings of putting profits before saving the world in “Daddy Knows Best.” In act two, Lee brings the audience to its feet with his exciting, exhilarating four-shoed tap dance in “I’m Not a Loser.” These songs define what SpongeBob is not: a showy, self-enriching, self-promoter. That puts him at odds with Mr. Krabs, Squidward, the scheming Plankton and—in this musical’s most delicious irony—Nickelodeon itself. (Michael Amedeo)