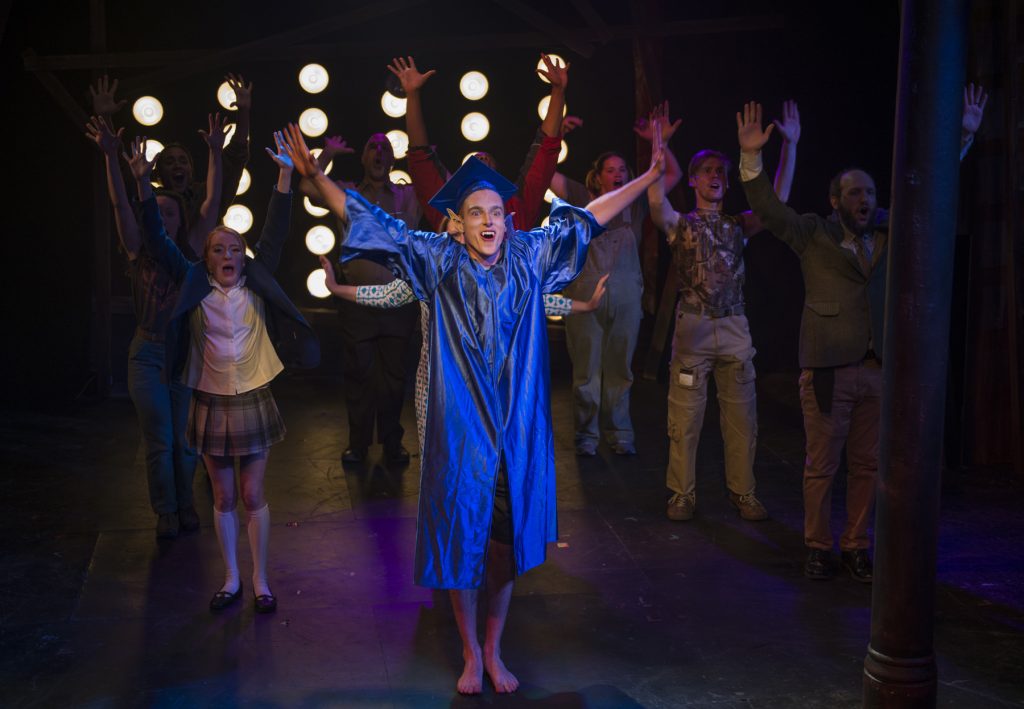 Henry McGinniss with the cast of “Bat Boy: The Musical”/Photo: Michael Brosilow

What took “Bat Boy: The Musical” so long to get to Chicago? Potentially contentious battles for performance rights aside, this is a town that lives for new work. You could argue that that attitude is not as prevalent within the musical theater community but the number of companies able to move effortlessly between musicals and non-musicals (to say nothing of companies dedicated exclusively to new musicals such as Underscore Theatre Company or Kokandy Productions) seems to suggest otherwise. Regardless, “Bat Boy” has at long last arrived in Chicago and he is not soon to be forgotten.

Taking its origin story from the infamous Weekly World News story, Keythe Farley and Brian Flemming’s book focuses on the Bat Boy’s upbringing in the conservative, God-fearing town of Hope Falls, West Virginia. Getting in plenty of jabs at the so-called “Christian charity” of folks who are otherwise unapologetically bigoted, “Bat Boy” operates under the guise of satire. Its themes of otherness and religious hypocrisy are timely to the point of being uncanny as if, back during its debut in 1997, the creators could already see Donald Trump’s swollen noggin cresting the horizon.

The Den’s Heath Main Stage, with its large, unavoidable columns, poses problems for staging and choreography. For the most part director Scott Weinstein and choreographer Rhett Guter find serviceable workarounds, though you may occasionally find yourself wondering why a character climbs a ladder on the side of the stage only to descend after a half verse.

Rather than spread its resources evenly (and perhaps thinly) across the entire show, Griffin Theatre smartly identifies the most important elements of its production. No expense is spared for the puppetry (courtesy of Lolly Extract and Amber Marsh) and it pays off in moments big (the shadow-puppet flashback/Bay Boy origin story) and small (a grotesque decapitated cow head). The pit band (led by Charlotte Rivard-Hoster) is among the best around in a season with a surprising number of rock-oriented musicals.

Like its namesake, “Bat Boy: The Musical” is a rare creature that you have to see to believe. (Kevin Greene)