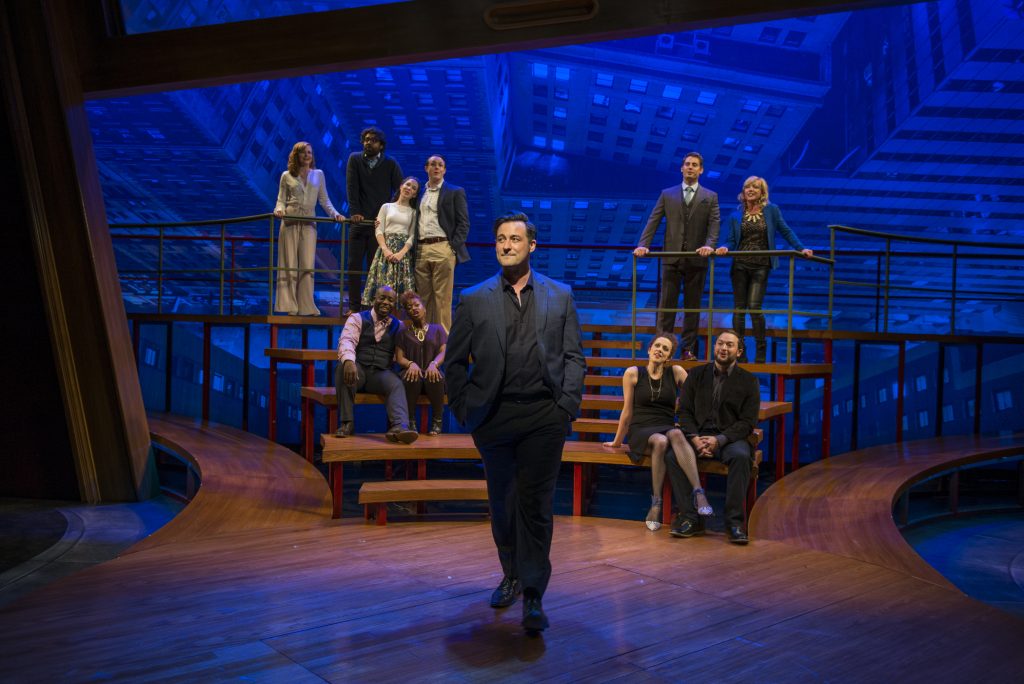 The Cast of Company/Photo: Michael Brosilow

An “adage” is an adage because it keeps turning out to be mostly true again and again. “Directing is ninety percent casting” is an adage produced by the idea that a successful stage production or film with the right “casting” as its cornerstone has the greatest chance of success. There is also an adage that says if an actor cries the audience won’t.

Seven of the fourteen in this cast answered expectations, grounded in internal truth with the vocal and emotional pipes to answer Sondheim’s blessedly crazy requirements. Jess Godwin’s April and Allison Hendrix’s Amy keep us breathless as they dig passionately for their own hearts. Christine Mild’s Marta is so right that it is impossible not to use her as the yardstick for the production. Chelsea Morgan’s Kathy, Blair Robertson’s Jenny and Alexis J. Rogers’ Sarah are spot on. Tiffany Scott proves that her range has its own zip code, delivering a fully-fleshed characterization in two-and-a-half lines and sporting a surprisingly lovely operatic soprano voice. Patrick Sarb’s Larry has deep grace, born of self-knowledge.

The leading character of Robert is a charmer who doesn’t indulge in self-examination, surrounded by friends who do. His journey toward that higher calling is the plot of “Company,” pure and simple. If we get to his cathartic fulcrum number, “Being Alive,” and it feels more like assault than enlightenment, we are in a very particular production of the piece. At the beginning of this show’s run, what feels like the search for a fresh approach has forced the arc out of proportion.

The Chicago theatrical community has issued a trumpet call for critics to shoulder responsibility for performer safety. Scenic designer Todd Rosenthal’s exciting set built almost entirely of steep stairs in front of a New York skyscraper mountain top looks very dangerous. As the actors came down the stairs, they appeared to be mixing business with pleasure, playing out and connecting with their audience while gingerly working not to tumble. When Joanne started spilling martinis, I wondered who would slip and trip first.

The casting gets a fifty-percent rating, there were too many tears, and I was frightened for the players. (Aaron Hunt)