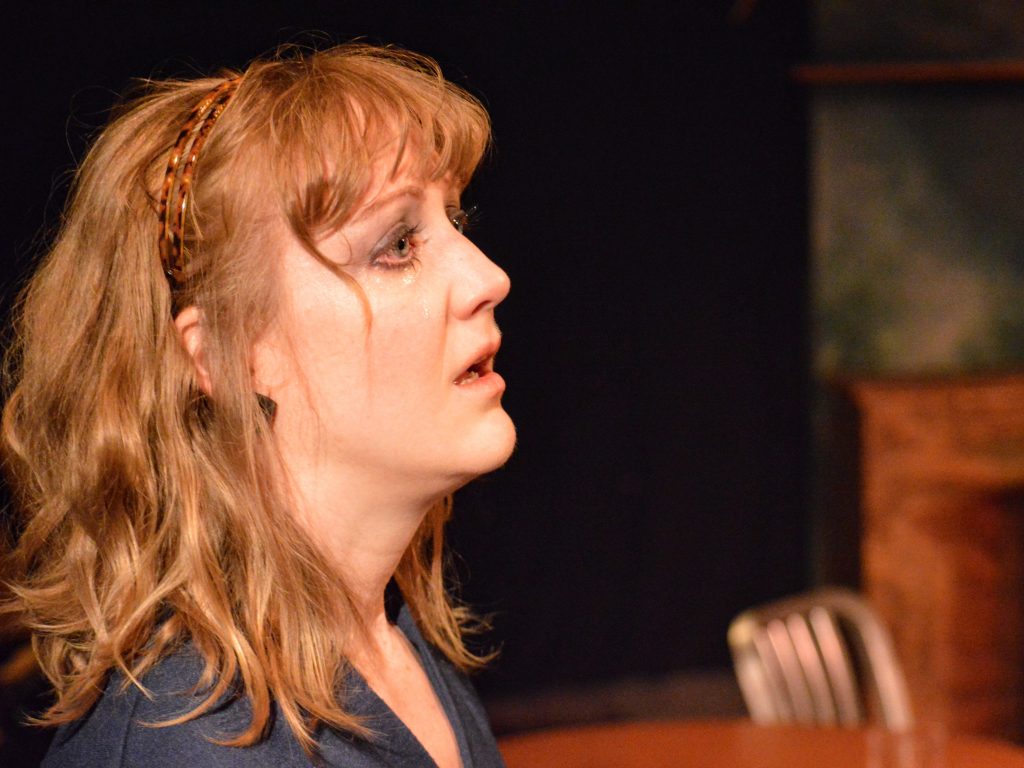 Edward Hopper’s 1942 painting “Nighthawks” is an emblem of American alienation: three customers, not making eye contact, sit together but alone at a diner counter, behind which the server looks beyond them to a street not only devoid of other souls but simultaneously cage-like and cavernous; the windows of the shops opposite are dark and empty, like so many lost teeth. Reverse the proportions of the genders and make the diner a bar in the Bronx and you have the claustrophobic setting of John Patrick Shanley’s 1984 play “Savage in Limbo,” emphasized by Gregory Pinsoneault’s set design, which wedges the dingy joint along the long diagonal of the stage at the Rivendell Theatre.

“Help me. My life is too long. I’m only thirty-two,” wails fish-eyed souse April (Philena Gilmer), who once aspired to aid humanitarian missions in India as a nun but who now dissipates her remaining minutes latched to the bar and the barman who keeps her in gin and the occasional Brandy Alexander. But here everyone is thirty-two: virgin dreamer Denise Savage (Abbey Smith), gum-chewing, pneumatic floozy Linda (Erika Haaland), her greaser boyfriend Tony (Antonio Brunetti) and Murk (Dan Toot), the bartender.

It’s like “Cheers” but no one knows anyone’s name and no one’s glad they came. It’s like “Huis clos“ only the exit’s always open and no one’s scared to go. In fact, if you’re not drinking, Murk’s glad to give you the boot.

The five bicker and banter, become allies and nemeses, dream of the pleasures of communion and conclude once more that hell is other people. “I’ll marry you if you promise me things will stay exactly as they are,” says Murk to April, who acquiesces over alcohol. “This is not life. Give me back my soul from where you took it,” rages Savage, blue eyes glittering with all the heat of a cold dead universe.

Shanley’s dialogue bites and the ensemble delivers his patter with the ease of scat and the conviction of the young who aren’t afraid to die because they’re scared stiff of living. (Irene Hsiao)