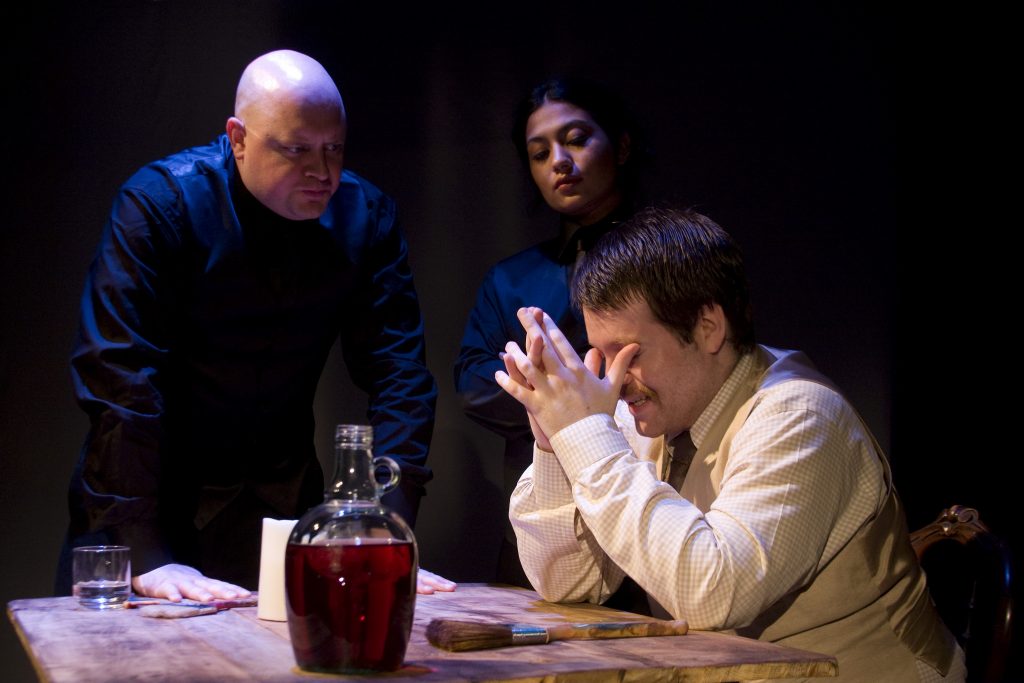 Victor Lodato’s comical drama is a love story, and a pretty kinky one at that. “The Woman Who Amuses Herself” puts kidnapping and bondage—among other perversities—in a romantic context. And it’s all based on real-life events that involved only one person.

In 1911, Italian laborer Vincenzo Peruggia slipped the Mona Lisa under his raincoat and walked out a back door of the Louvre Museum. He would keep the cherub-cheeked woman with the piercing eyes and the mysterious smile in his dumpy, one-room Paris apartment for more than two years until he was finally caught. This is where Lodato’s play takes over, speculating—among other things—that Vincenzo didn’t really steal a painting as much as he kidnapped a woman with whom he was in love: Leonardo da Vinci’s immortal lady.

Played by Nathan Thompson with a thick mustache and an even thicker accent, Vincenzo tells the audience his story as a fractured confessional that’s inspired, witty, self-critical and quite sad. The best moments come in flashback scenes of his “home life” with the Mona Lisa. Like an infatuated new husband, he reveals everything about himself to her and receives, of course, nothing in return but a seemingly critical silence. He fears he doesn’t live up to her ideals. In Lodato’s most inspired moment, Peruggia laments that he’s more a prisoner of her than she is of him.

Their surreal “relationship” is like something out of Samuel Beckett’s “Happy Days,” where a woman chatters away with her mute husband as the two are gradually buried alive. Unfortunately, Lodato only flirts with absurdity, deciding to draw back by interweaving future scenes of others being mesmerized by Mona Lisa’s charm. These interludes exude humor, insight and, in one case, bald-faced bawdiness but they also take attention away from Vincenzo and his unique, one-sided love affair.

In the end, Mona Lisa got much more out of their “marriage” than he did: She became the most famous painting in the world; he’s little more than an interesting footnote, even in a play that he drives. Love isn’t always fair. (Michael Amedeo)