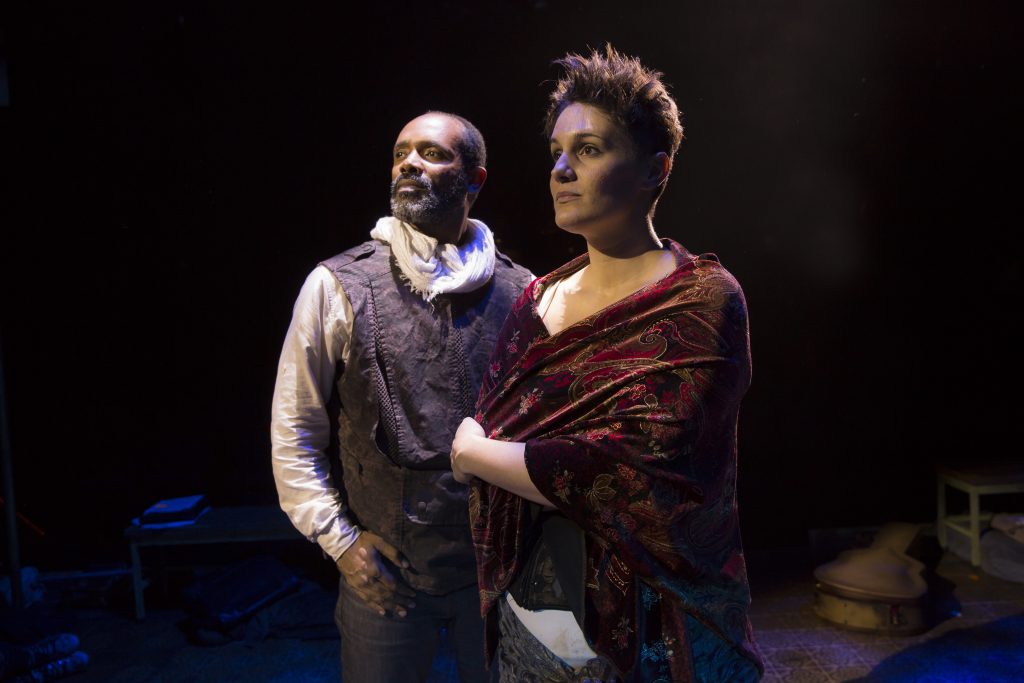 If today’s audience hasn’t spent time in Miguel de Cervantes’ Inquisition-riddled Spain, Marriott’s “Man of La Mancha” will show them how few steps it takes to walk from Don Quixote’s dungeon to today’s news headlines, both world’s rife with life and death battles born of social and financial inequity.

This gritty version is stripped of chorus, dancing, overture and intermission. Musical director Ryan T. Nelson’s band sounds terrific, despite several moments of confusion between the stage and the pit when I saw the show. Nelson contemporizes choral sections and, if my ears did not deceive me, the transposition pedal was pushed to the metal. Nancy Missimi costumes the cast shrewdly in a nearly modern dress with caps and corsets looking like found objects from a garbage bin. Jeff Kmiec’s set is more holding cell than boulder-strewn vault.

Director Nick Bowling’s twelve players are cast wildly against type, led by a young and vital Nathaniel Stampley. Handsome of person and voice, Stampley’s Don is as amiable as ever, if less befuddled. His tenorial singing makes short work of the high notes in the piece but robs us of the operatic woof a baritone brings to the role.

Danni Smith (who gave such a strong showing in Marriott’s “City of Angels”) also plays against some conceptions of Aldonza, her performance rooted in the original portrayal by Joan Diener. The aural residue of Diener’s wide-ranging and extremely specific voice has made this iconic role as challenging for singing actresses as any role written for Ethel Merman. If Smith’s calling card is the warm middle of her voice, it has little chance for display in this score, as roles written for Diener avoided that part of her voice where the sound could noticeably splinter. But Smith gives a stunning portrait of a person so stripped of their humanity that they are dead inside and then lets us watch the tiniest light turn on behind her eyes and grow to flame.

With color, size, shape and age-blind casting on display in this production, the family the prisoners create is of us all with everyone invited to reach for the stars. (Aaron Hunt)