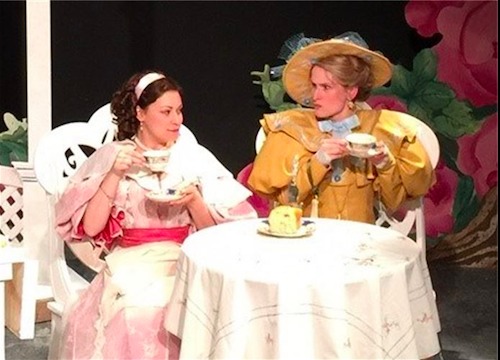 As a bisexual writer in Victorian England, Oscar Wilde intimately knew the challenges and the hypocrisies of living a double life. He channeled that insight into “The Importance of Being Earnest,” an endlessly amusing satire about rampant duplicity among the upper classes. In its very sexy and scintillating revival of the classic play, Dead Writers Theatre Collective reminds audiences that—for more than one-hundred-and-twenty years after its debut—“Earnest” itself has lived a double life as both a slyly gay farce and an unconventional, mostly straight comedy of manners.

The cast of characters centers on John Worthing (Sean Magill), a serious young man who lives in the countryside but plays in the city where he maintains his secret identity “Ernest.” As the play opens, he visits the London home of his flamboyantly hedonistic friend Algernon (Jack Dryden), whose cousin Gwendolen (Maeghan Looney) “Ernest” wishes to marry. The flighty and flirtatious lady accepts his proposal but seems much more enamored with his name than with his person.

Later, the mischievous Algernon goes to John’s house to raise some sensuous hell that he calls “Bunburying” (a gay double pun). Posing as John’s wayward (nonexistent) brother, who is also named Ernest, Algernon falls in love with Cecily (Megan Delay), his friend’s fetching ward. She agrees to marry him but makes it clear she would never say “yes” if his name wasn’t Ernest. Can the not-so-true loves of the two faux Ernests survive the truth and the prosecutorial third-degree of the acidic, judgmental Lady Bracknell (Mary Anne Bowman), who is Gwen’s mother and Algernon’s aunt? The play gets even funnier and more farcical before we find out.

This “Earnest” excels by playing to both the gay and straight interpretations of Wilde’s work. It’s a double vision of double lives: Each and every character is a hypocrite who keeps another self on the shelf. The gay subtext is still endearingly present but so is a severely straight Lady Bracknell who—in Bowman’s biting delivery—vehemently boasts that she never “undeceives” her husband “on any question.” Marriage is everyone’s folly now. (Michael Amedeo)