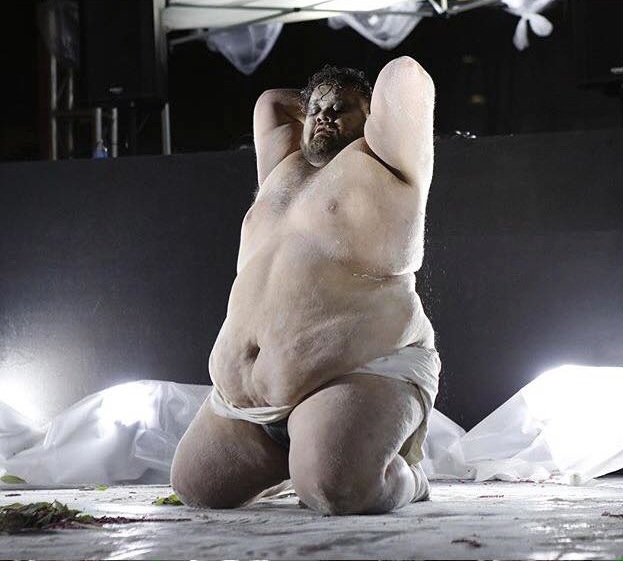 Rose Hernandez is a Chicago-based queer Latino performance artist whose work is garnering increased attention here and in Los Angeles. Hernandez performs in July as part of “Eternal Return” at the Archer Beach Haus. We recently talked with him about his life, his work and how spiritual practices inform his performances.

You’re originally from Dallas, correct? What brought you to Chicago?
Yes, I’m originally from Dallas, and came here on a transfer. I have this huge art history and theater background, but I stepped away from the theater because there were no roles for me. There aren’t any roles for Latinos in plays and especially in my interest: classical theater, classical training. I applied to School of the Art Institute and it seemed like the best fit. I was working with video and got back into performance. It was a different approach because it was me making performance work and figuring out what that would look like, toiling around making these mimic-y works drawing on seventies body art, very body-based. Lots of Chris Burden stuff, and then I thought, “this just feels weird.” It felt like I was back again in someone else’s play. It was when I started working with Ginger Krebs and got into her work, she kind of mentored me and was a huge influence on me. I was thinking about applying different sorts of philosophy practices—we were reading “The Plague of Fantasies” by Zizek who now, eight years later, I’m kind of like okay, wow.

Right, the Judson Church era, all of it was driven into the background by a deep fascination with Postmodernism and poststructuralist theory.
Definitely, and I was also learning a lot from looking at Minimalist sculpture and thinking about mind, body, performance, presence and the act of viewing—which is when my theatrical training came back in. My work got bigger, more theatrical, bringing in a lot from the audience and my own experience, growing up queer and Latino in Texas, and just even a fat, goth teen. I grew up really Catholic too, and moved away from that as a teenager, and got into witchcraft and the occult. I was like, “why isn’t this in my work?” and reading a lot of performance theory, specifically by [Richard] Schechner and thinking a lot about cultural studies, different tribes, and ritual practices in different cultures, and creating my own practices and ritual urbanism. I got taken with it and went into a more specifically spiritual practice.

Tell me about working with Ron Athey and the work you’ve done showing out in Los Angeles, it seems you’ve had a stronger reception there than in Chicago.
I’ve been a fan of Athey’s for a number of years and a lot of my influences come from that era of late eighties performance artists. He came to Chicago to perform a few years ago at Mana, through Joseph Ravens and Defibrillator Gallery, and Joseph said, “I’ve got to clean up the place, they all want to hang out and meet some artists.” So, basically we just hung out all night with Ron and Jon John and Sage Charles. We talked a lot about our own work and where we came from and made the connection that way over three days. Ron talked about us with Manuel Vason, the photographer who works with all these different performance artists all over the world. We were in his performance during Rapid Pulse last year. When I went to L.A. he asked me if I wanted to perform at a club or a gallery. I told him I wanted the trip to really be worth it, and that’s how I met Nacho Nava who hosts the biggest queer party in L.A. called “Mustache Mondays.” Before all that, Ron put up this photo of me on his Facebook and said, “this person is coming to L.A., give them a show.” And that’s how I got in touch with Jennifer Doyle who curated music and performances at Human Resources. I performed at the MOCA-Geffen; I was in Wisconsin at ACRE, they drove me to Madison and I basically had one day to get ready. 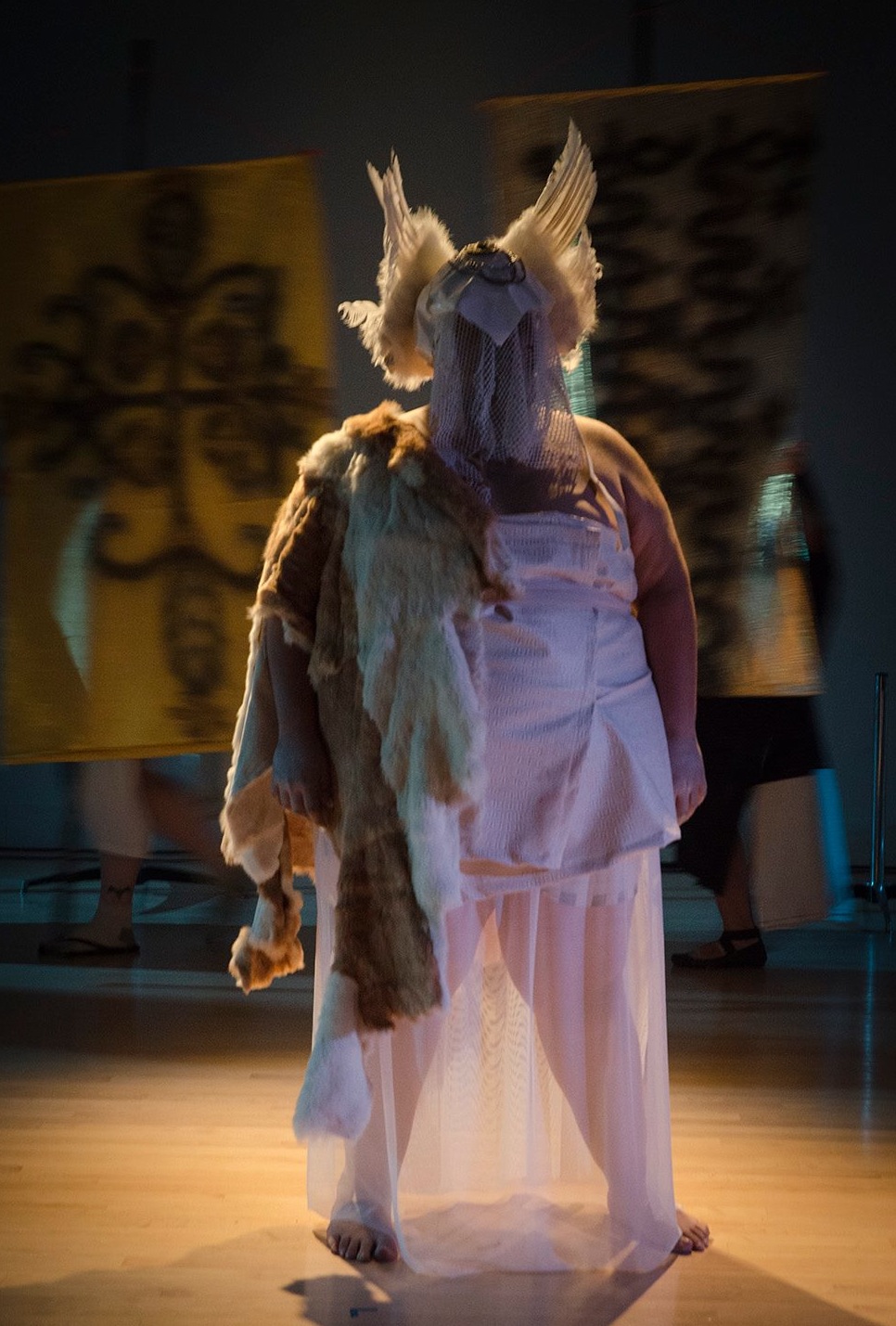 One of the performances I saw of yours at High Concept Labs involved destroying a sculpture, literally tearing it to pieces and crushing it with your body.
I wish people didn’t have to think of art objects as precious all the time. And also, destruction is a creative force in its own right, too. We went into that performance knowing we were going to destroy a sculpture—that was with my collaborative team called Burning Orchid that I’m in with my friend Efrén Arcoiris and he’s like, “I’m just going to build you something and I want you to destroy it, just fuck it up and sit on it.” And I said “okay, I’ll sit on it.” That performance was insane because it was almost an installation in that white warehouse space, and I was plastered against the wall. I said “I’m going to be in this corner, not moving for thirty minutes and I just want you to throw a bucket of plaster on me.” So I was really stuck to the wall. At one point I peeled off from the architecture of the space and made my way toward this stupa with all these stations and five different parts of different elements and with a giant void at the top.

It’s interesting you walked away from your earlier Catholicism and yet still ended up with a spiritual practice.
Catholicism is really fucked up. I think the imagery is so gorgeous and I love the structure of Mass, the timing and the structure of the Mass, how everything has a certain order: you kneel down, you get up. I was thinking about how a lot of that was a performance and that leads into these rituals in other cultures. There are things you do in a certain order: “this is where we stand.” You have to do it in a certain way and then you throw in the leaves, throw in the salt and then you walk three times around this way. So, there’s all these different kinds of movements and rules you’re inventing to build this ritual. Urban ritual—I did say that. You know, I’m living in a city and there are certain things I do. I’m getting up, setting an alarm. I have to make it to this bus at a certain time. What is the weather like outside? That decides what shoes I wear, what jacket I put on. Who do I run into on the street? All of these things that help you get through your life—it’s like, “I’m going to get my coffee because I need this,” or “I’m going to get my juice,” it’s these certain things I need to get through my day. Or, things that I do to wind down. “I have to go have this beer,” or “I have to go have this gin and tonic.” So these things we do, there’s simple silly self-care things and things you do to make you feel safe living in the city, because the city is a really fucked up place.

Right, and people can be really fucked up to each other.
Right, it’s capitalism and people are bullshit. People build their own safe spaces for themselves to deal with wanting to lash out and rage—which I also think is healthy too. It’s important to build-in yourself that time to tune in and drop out.