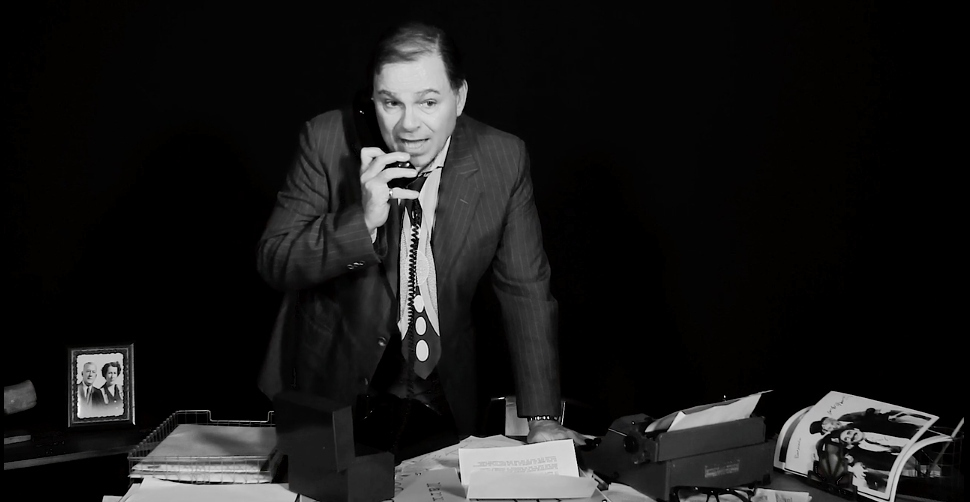 “When there is no mensch, be the mensch.”

ShPIeL-Performing Identity’s “A Jewish Joke” draws this saying from the Torah’s Pirkei Avot, which translates to Chapters of the Fathers. The book, and coincidentally this solo show, presents a compilation of teachings on ethics and interpersonal relationships. In a world full of consistent prejudice and terror, “A Jewish Joke” envelops the audience in an embrace of understanding, compassion, anger and, of course, laughter despite the tears.

Fifties Hollywood comedy screenwriter Bernie Lutz (Phil Johnson) is preparing his big red-carpet premiere; coming from shoes that needed newspaper patches, he built his career from the ground up with his partner Morris by kissing the tuchus of Hollywood. On the same day as his premiere and at the height of the communist blacklist, Lutz, Morris and other Jews working in Hollywood are added to the Red Channels. Amidst well-worn Yiddish jokes, Lutz must make an impossible decision in the face of the “Red Scare” when he is asked to reconcile the irreconcilable.

Jewish humor has become a panacea with a long tradition of combining entertainment with social justice, amusement in light of terrible events. Johnson, who plays Bernie and also co-wrote the play with Marni Freedman, is an unquenchable, unstoppable talent, engaging the audience with distinctive movements, hand gestures and a laugh that could delight the saddest boychik in the room. It’s easy to forget he’s alone on stage, so captivating is the writing of his phone calls. David Y. Chack’s direction allows Johnson to command the stage. The choice of alternating red and white lighting only adds to the spaces in Johnson’s rare moments of silence.

After ninety minutes, the audience is distressed by Bernie’s decision. There is a mastery in Johnson’s multi-leveled performance, every drip of sweat, every gesture, every micro-expression of his face is felt beyond the doors of the theater. You care for him like he is a dear uncle or a friend, trying to make sense of a senseless world.

What a mensch. (Danielle Levsky)