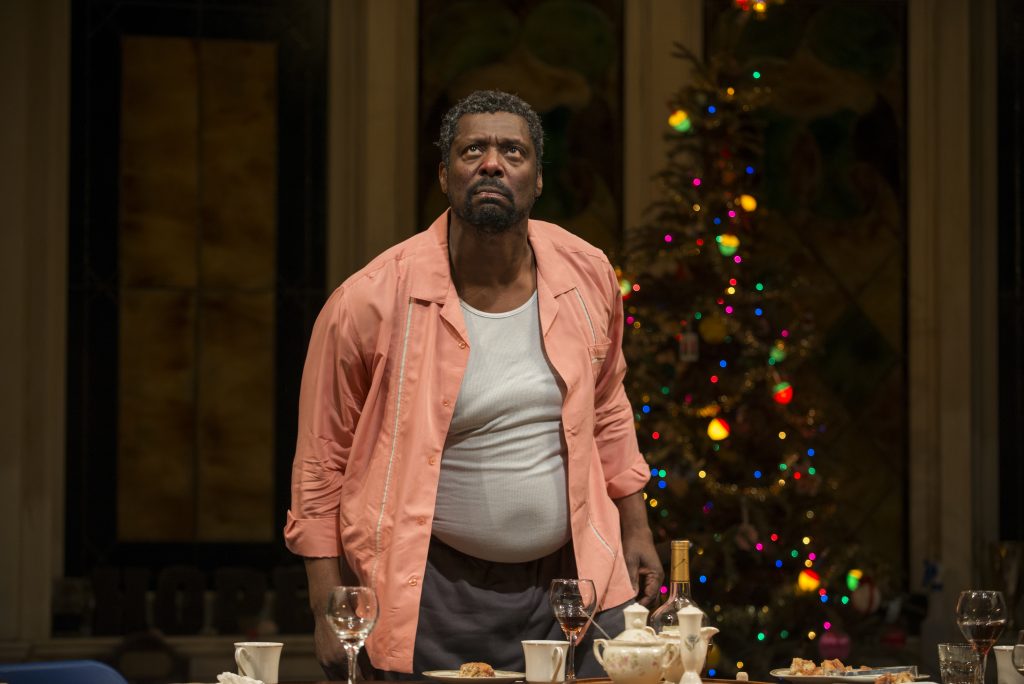 Harrowing devastation is felt every time the words “six shots” are said in “Between Riverside and Crazy” by Stephen Adly Guirgis. Who could have known that this play’s Chicago premiere, at Steppenwolf Theatre Company, would so presciently reflect modern day issues surrounding police-involved shootings?

Just days earlier, a viral video surfaced of Baton Rouge, Louisiana officers shooting and killing Alton Sterling in front of a convenience store where he was selling CDs. Yet Guirgis’ play is no soundtrack to the current movement for justice against police brutality. A startling revelation negates that idea. But it is a not-so-friendly reminder that these things do, in fact, occur not just on stage but in real life.

Unlike Sterling, Pops (Eamonn Walker) lived to tell the story of how being shot six times by a white rookie cop not only ended his career as a thirty-year veteran police officer but was the reason why his life spun quickly into disarray.

Pops’ Riverside apartment (the design of which, courtesy of Collette Pollard, was inspired by the playwright’s actual apartment) harbors the usual characters you might see in a Guirgis play: societal misfits who are teetering on the border of change even as their former lives keep their feet stuck at the line.  There’s Pops’ ex-con son, Junior (James Vincent Meredith), Junior’s girlfriend, Lulu (Elena Flores), who may or may not be in school for accounting and Junior’s friend Oswald (Victor Almanzar), who is fighting a losing battle against sobriety.

Director Yasen Peyankov has created a world that allows Guirgis’ 2014 script to organically sing through the actors’ performances. No added fluff, just the nitty, gritty comedic darkness that Guirgis wrote.

However, this play is not without flaws. The conflicting realities on stage can be a bit disorienting and seem to come out of nowhere. But all in all, “Between Riverside and Crazy” is exactly where you want to be. (Loy Webb)