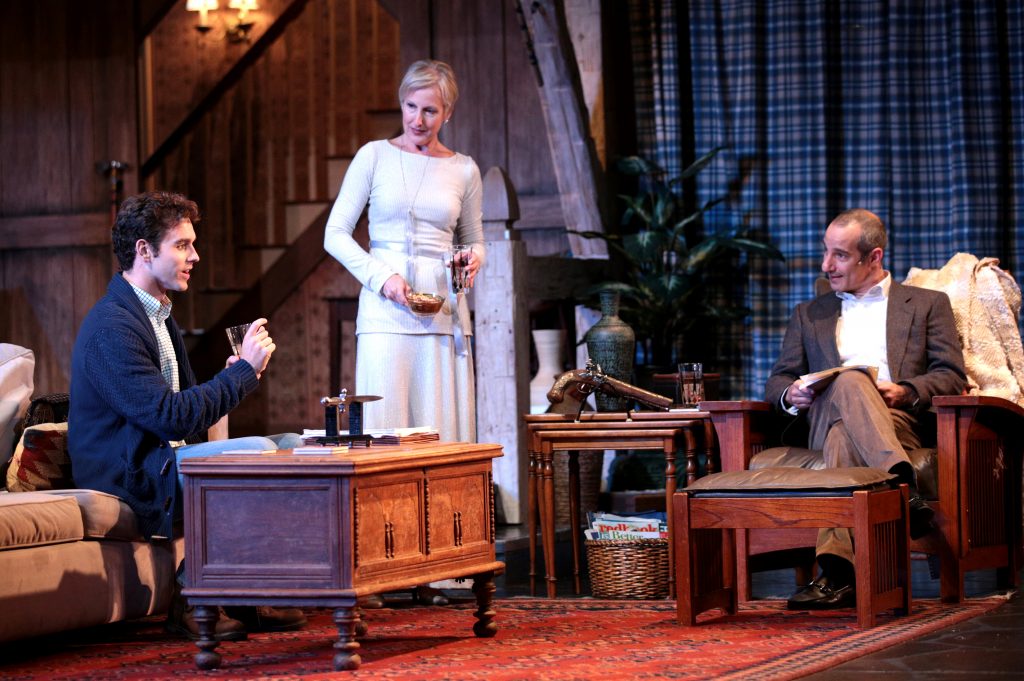 With pop tunes warbling over the speakers and a voiceover news report placing the action firmly in 1978, the audience had only to study Jeff Kmiec’s intricate, period-perfect set to know they were in good hands as they prepared to enjoy the latest production of one of the longest-running thrillers of our time.

Director William Osetek’s actors and production team certainly delivered. With Daniel Cantor as Sidney and Aaron Latterell as Cliff, it would seem the cast couldn’t be more perfect. But with the addition of McKinley Carter as Myra and the irrepressible Cindy Gold as the psychic Helga ten Dorp, the rollercoaster ride just couldn’t fail. Kmiec’s single-room set is so enticing I can’t imagine a member of the audience not wanting to move immediately to its Connecticut locale and curl up on the couch. Heather Gilbert’s terrific lighting design kept a pin spot on the theater posters on the walls of the upper level at nearly every moment, reminding us that even the grisly murder plotting is all in good fun.

I could quibble. I don’t understand why the actors were miked. Despite Drury Lane being a cavernous space, Chicago artists have made themselves heard when speaking in that theater for many years. Cantor’s microphone was particularly visible from my seat on the day I saw the show. I also thought the actors didn’t trust the audience to laugh during the first fifteen minutes. But once Carter plopped down on the coffee table with spot-on timing and triple-layered expression, the players started leaving time for playwright Ira Levin’s zingers, letting the multi-age audience join them in the fun.

I would buy a ticket to watch Cindy Gold act the phone book.

So head northeast to Connecticut for a ride on the “Deathtrap” train. You’ll alternate between held breath and reckless guffawing. (Aaron Hunt)