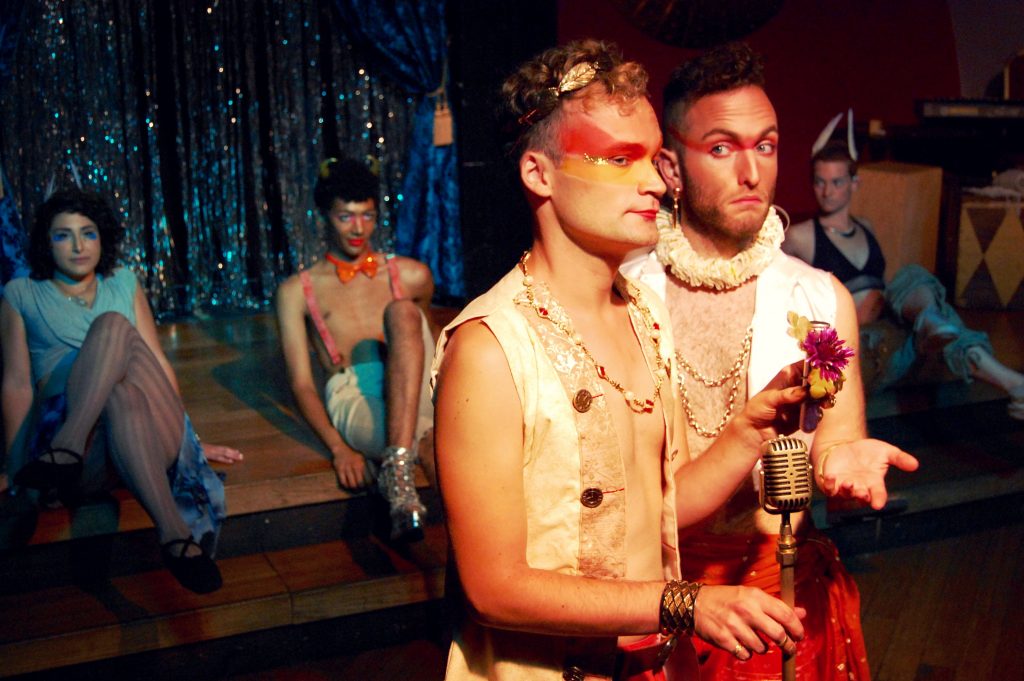 In this pop-rock ode, the charming Puck (Nathan Maurice Cooper) and other fairies prepare for the Midsummer celebration in light of the rocky relationship between King Oberon (Kevin Webb) and Queen Titania (Raymond K. Cleveland). Oberon hopes to re-invoke the spirit of Midsummer when four mortals suddenly wander into their world; the fairies get them drinks with a side of deception on the house.

From the introductory song to Brad Caleb Lee’s scene and costume design, the audience is transported into a Midsummer fairyland. The script is quippy but oft profound, highlighted by standout performances by Cleveland, Webb and Cooper, who embody their famed characters in wit, drama and shade so strong they can make the sun set. The chemistry between Moth (David Mor) and the cast of supporting fairies is made palpable and cohesive through his delightful sass, allowing them to play off of one another like a chess board. Except here the chess pieces are the mortals. Caitlin Aase reminds us that we are indeed at a cabaret with an evocative and hungry strip tease.

Under the supervision of sound designer Kallie Noelle Rolison and choreographers Derek Van Barham and Christopher Young, the music and dance that accompanies many of the conflicting emotions brings the characters closer together through a harmonious and balanced stage.

“BITE” examines the game of love through a queer lens, teaching Oberon, Titania and perhaps the viewer a thing or two about devotion and romance as well as lust and longing.

[…] A Pucking Queer Cabaret” by Pride Films & Plays at Mary’s Attic. Click here to read my […]