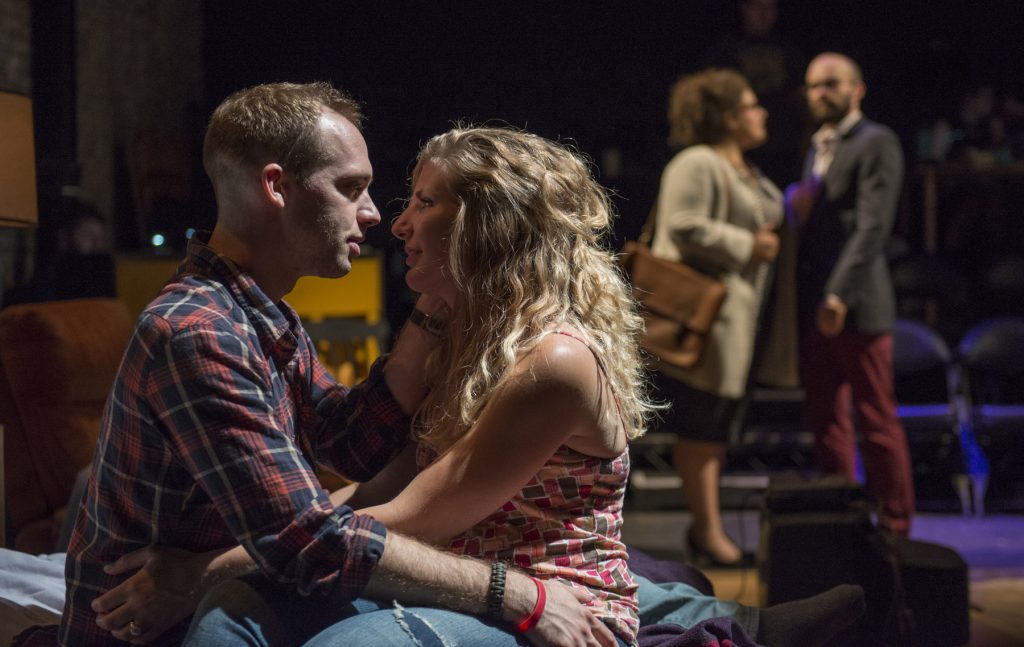 In Samuel Beckett’s “Quad,” four characters occupy separate quadrants of the stage, each marking abstract yet explicit relationships—love, rivalry, commerce, community, isolation—through the quality of their footfalls and their punctuated immobility, never speaking as they move in a coordinated series.

Laurence Mark Wythe’s “Tomorrow Morning,” though initially suggestive of the dynamics of a similarly topological milieu, is nothing of the sort. Here, the Brita pitcher, knickknacks, laptops and general suburban clutter are scattered over a set divided into four interconnected spaces, each indicating a separate domicile.

The play goes wrong from its first lines, sung flat, by actors who are unnecessarily miked: “Tomorrow everything changes/Nothing will ever be the same.” While neither incorrect nor unfamiliar in sentiment, given their similarity to others from “Annie,” “Les Misérables” and “Rent,” these lines lack poetic quality. In combination with their overused phrases and Wythe’s utterly forgettable, overly protracted tunes, they produce an effect that can only be described as irritating.

It is the night before the wedding of John (Neil Stratman) and Kat (Tina Naponelli) and the night before the divorce of Jack (Carl Herzog) and Catherine (Teressa LaGamba). Young John and Kat are tantalized with hope, fear and tremendous sexual appetite. Elder John and Kat are full of regret, anger and the effects of a decade-long post-coital ache. Young John is worried he’ll never sleep with other women. Old John has committed an infidelity. Young Kat hates her off-the-rack wedding dress and is a young pregnant editor. Old Kat is a senior editor that still feels unrespected.

These are the torrid dramas of a play premised on the sanctity of marriage, in which even the young couple’s fantasy sequence (impersonating a pool cleaner paying a visit to a married woman) is trivial and masturbatory. “Tomorrow Morning” depicts without finesse the limitations of an inherently flawed social construct and the tantrums of those disappointed by that inevitable discovery. (Irene Hsiao)