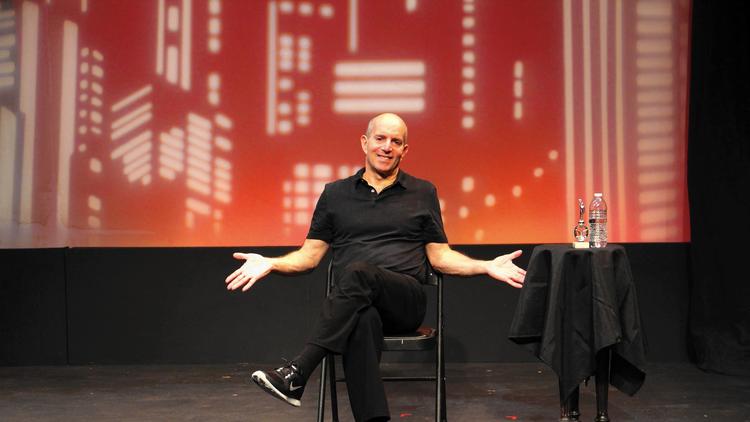 The title is the best thing in Brad Zimmerman’s one-man kvetch-fest about his twenty-nine years waiting tables in New York while awaiting his break as an actor. Half standup act, half autobiographical monologue, Zimmerman’s ninety-minute show initially amuses, thanks to the gruff-voiced writer-performer’s gift for sardonic one-liners, which are as smoothly delivered as the plat du jour at the Four Seasons. But the comedy soon segues into an uneasy kind of psychodrama more suited for a group therapy session than a stage.

Zimmerman has achieved some success, opening for luminaries such as George Carlin and Joan Rivers (who wickedly described him as “the best comic in his price range”). But he is no name brand himself, a fact that fuels his anger at a world that refuses to give him the adulation he appears to see as his due. His resentment takes many forms, from disturbingly violent fantasies about reality-TV celebrities and wine snobs to a chronic snarkiness about his restaurant customers and borderline misogynistic observations on dating and relationships.

A talented athlete in his New Jersey youth, cheered on by his successful father, Zimmerman cannot escape the nagging fear that his life peaked in high school. His decades of waiting tables are a source of both shame and material for his act, as when he notes that he made more at his bar mitzvah than he did last year. His mother’s expectations add to the pressure as does Jewish culture in general, with its long-running debate, according to Zimmerman, on whether a fetus should be considered viable before it graduates med school.

It’s funny stuff, if not always shiny new, but the underlying bitterness and hostility are unrelenting and finally overwhelming. “My only option is to use my contempt constructively,” notes Zimmerman. “The world is not my kind of place.”

In the end, this show isn’t so much a Jewish tragedy as a showbiz one. The bottom line is that Brad Zimmerman wants to be a star and those around him are either an accomplice or obstacle in that quest. The neediness and self-pity that power his act also sabotage it, imparting a please-love-me quality that gets awkward fast. This mock tragedy is chock-full of the wrong kind of sadness. (Hugh Iglarsh)