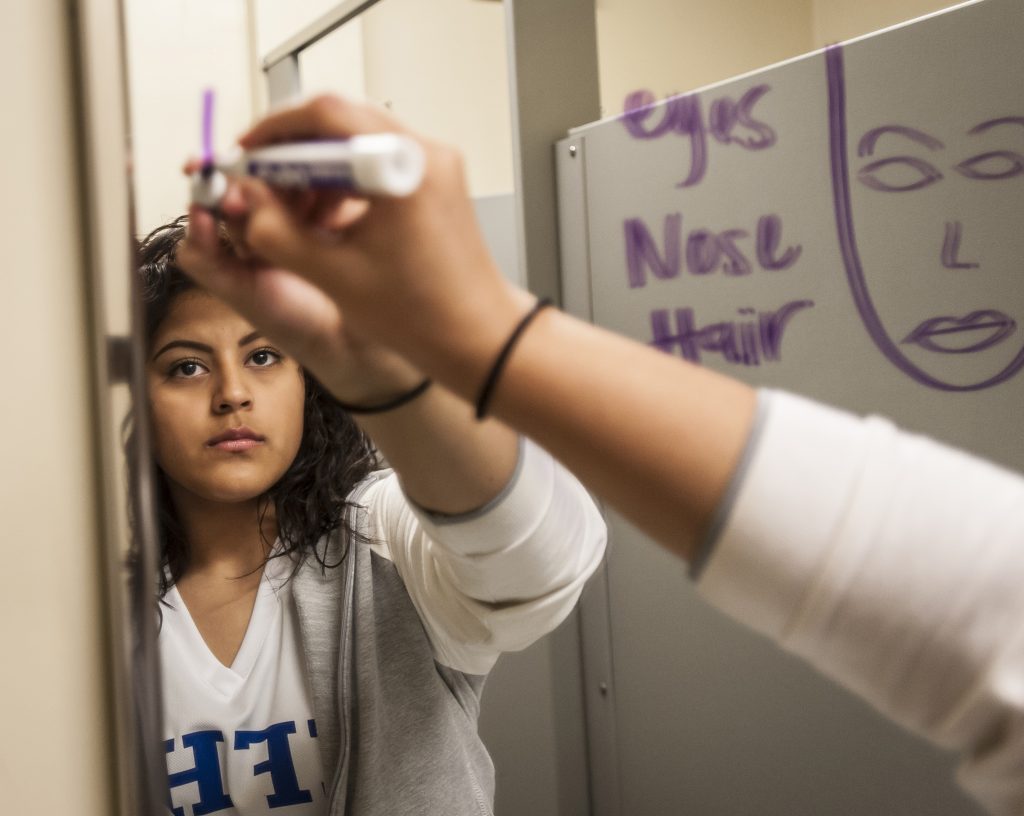 Between the buzz of the hallways and the scrawled “Lucy <3’s Edward” on the bathroom stalls, it’s impossible not to feel like a hormonal and awkward teen again.

Outside Ellen Gates Star High School, Albany Park Theater Project (APTP) ensemble members, most of them still in high school, shriek with delight while throwing around a basketball. They’re on a break from rehearsing their scenes.

Inside, a piece of paper is taped to the wall of the staircase reading “Young Love Stairs.” APTP artistic director David Feiner explains that there are four flights of classrooms, most occupied by ensemble members (thirty-one in total) and one or two of the production’s eight directors and five designers. Piped through forty-five speakers and 5,000 feet of sound cable, music reminiscent of John Hughes’ films, composed by acclaimed composer/sound designer Mikhail Fiksel, plays throughout the classrooms, hallways and stairwells.

Around seventy people are a part of the production, Feiner emphasizes.

“Learning Curve” follows the lives of students and teachers in a typical Chicago public high school, taking its audience members through classrooms, teachers’ offices, hallways and even bathrooms. With this project APTP collaborated with Third Rail Projects, a Brooklyn-based company known for their work in immersive theater.

To attain this immersive experience, the show’s directors encouraged their actors to research, free write and work together to formulate their characters. This type of improvisation allowed for the immersive theater to become more intimate.

Alyanna Parajado, who has been with APTP for three years and recently graduated high school, said that this process allows for “the audience to make a choice, too.” When the workshop version of “Learning Curve” ran last year, she and Ely Espino, an APTP alumnus who went through APTP’s college counseling program and just finished her first year of college, were in a bullying scene together. Espino was bullying Parajado, trying to put lipstick on her face. How the audience reacted varied from person to person.

Associate director Maggie Popadiak recalls how the audience kicked out Espino and another “bully” actor. One audience member went so far as to sit Parajado down and wipe the makeup off her face.

“People are in the middle of this,” says Popadiak. “They can’t forget. Maybe that audience member takes the scene with her, maybe she sees the world in a new way, maybe she stands in the face of injustice on the street.”

Espino, who played the bully, felt uncomfortable in that role, recalling her own high-school experiences. Sometimes, it felt too real but “that’s what happens when we do our storytelling,” she says. She defines it as storytelling rather than acting or memorizing lines because these performances include something personal.

“That’s what makes this theater different,” Espino says. “It matters. A lot of us come from Chicago Public Schools that are lacking or have problems. When you’re in the system for so long and you see how neglected the students are, how much we’re lacking and missing, you grab that.”

By performing a play about education, she invests in her own experiences and puts all of that into her storytelling.

“Whether you’re a student or a teacher, you can see the frustration from both sides, because it’s neither of their faults,” Espino says. “Whatever character you portray, we all come from a system that has taken from us and is holding back from us. It’s so real.”

Stephanie Castrejon, who also went through the college counseling program and graduated from college this past spring, finds this realness to be the beauty of APTP.

“The directors and everyone on the staff allow us to be vulnerable,” Castrejon says. “That’s where our innermost passion and emotions come from. And they feel that, and we don’t want to let that go.”

To help her prepare for one of her roles as a teacher, Feiner encouraged Castrejon to read Rachel Aviv’s New Yorker essay “Wrong Answer,” which focuses on Damany Lewis, a math teacher at Parks Middle School in Atlanta who was the subject of a scandal involving stolen standardized tests. Aviv’s piece demonstrates the pressure and expectation teachers face to prevent schools from closing and losing their jobs.

“It just showed me how corrupt the school system is,” Castrejon says. “I look back at my ACT scores and think, ‘I was judged by those scores when I applied to college.’ I remember sitting in the gym at the long row of desks and feeling ridiculous because everyone had a different way of taking exams. I see the frustration from teachers. I feel like that’s how I connect.”

For all the students, the experience of the audience is directly related to their own performing experiences. Parajado loves performing in uncommon places and scenarios. Espino enjoys looking at the works in progress, especially in the context of these audience members “who have no idea what’s coming at them.” Castrejon sees opportunity in each of the spaces and scenes.

“What I hope for is that we will come together at the end and be able to see who saw what and share that together,” Castrejon says. “We can bring the full experience together.”