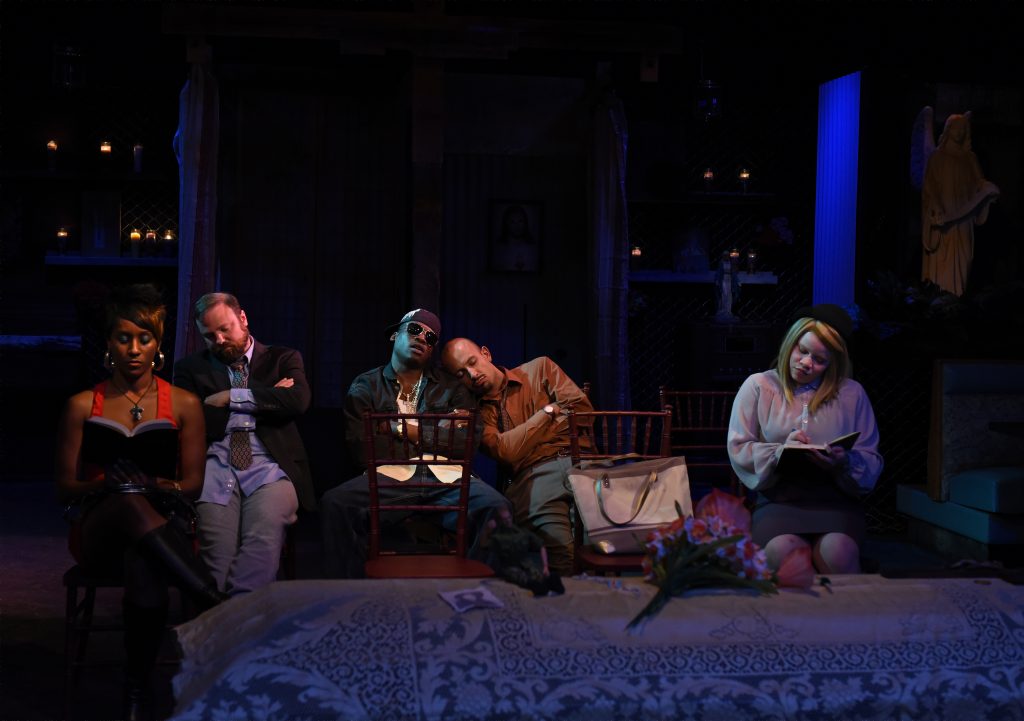 A friend put it best: Stephen Adly Guirgis makes theater feel cool. You can see a similar phenomenon in the cultish enthusiasm for Ike Holter. But while Holter’s plays are radically of their time, Guirgis is more old school, locating characters that are deeply entrenched in their ways with little or no hope for the kind of upending change that audiences, themselves in search of validation for their own entrenched lives, desire. This is what makes Guirgis such an exceptional playwright. It’s also what makes his plays, including “Our Lady of 121st Street,” so difficult to navigate successfully.

Written around the same time of “Jesus Hopped the ‘A’ Train,” which opened Eclipse Theatre’s Guirgis-dedicated twenty-fourth season, “Our Lady” represents one of the playwright’s earliest works. In it you can see him experimenting with form. “Our Lady” has nearly twice as many characters as “Jesus.” Subsequently the attention to detail and depth that characterizes Guirgis’ stronger work is absent here. In its place is a sprawling “Balm of Gilead”-style milieu in a production that is a tad heavy on pathos and a touch light on control.

Guirgis’ script is burdened with superfluous characters, which, under ensemble member Sarah Moeller’s direction, are played for novelty, further highlighting their lack of necessity. The audience’s approval of these cheap laughs fueled an over-the-top first act on opening. The second act was more restrained and stronger overall but dragged in its anticlimactic finale.

This production is not without bonafides. Kevin Hagan’s scenic design is a mash-up of the sacred and sacrilegious. Bernard Gilbert, Celeste M. Cooper, Paloma Nozicka and Rudy Galvan are all individually strong and better when in combination. Gilbert and Cooper’s rocky marriage and subsequent divorce successfully alludes to history without the handwringing of indulgent monologues. And while I’d normally applaud a playwright for not trotting out their funniest character whenever the story needs a break, I could have taken plenty more of Nozicka’s Nasty Norca.

Guirgis is on track to be one of the most performed playwrights in Chicago this year thanks to Eclipse and Steppenwolf’s excellent “Between Riverside and Crazy.” It is an honor, though one that carries a weight of responsibility for the theaters that take on his challenging work. Eclipse missteps here but has a good shot at redemption with season closer “The Little Flower of East Orange.” (Kevin Greene)