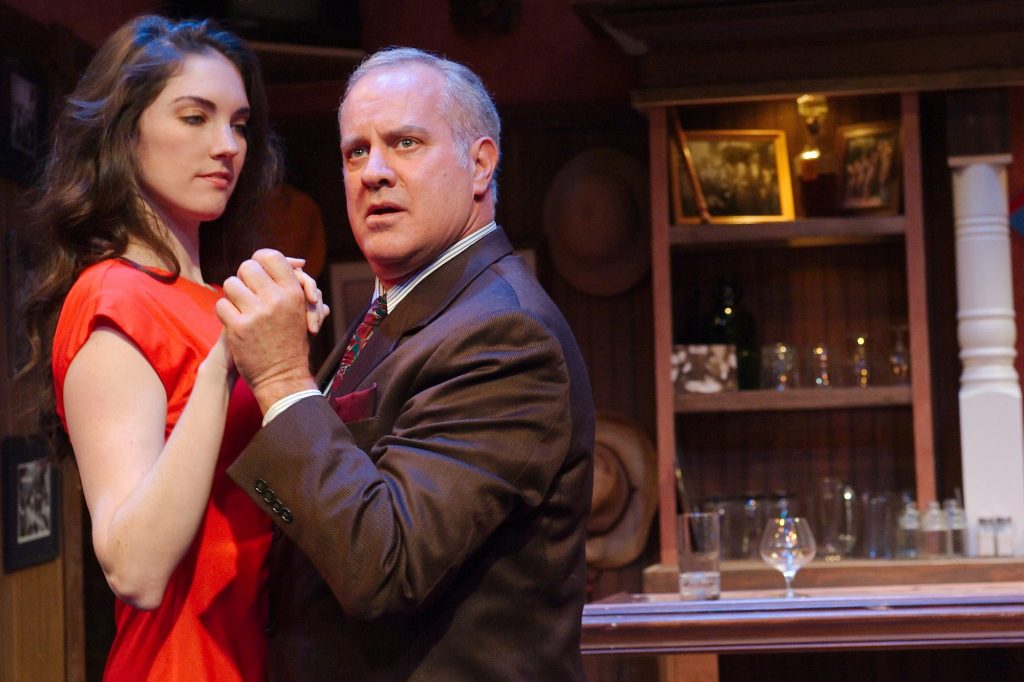 One man in a bar is a bartender. Two men in a bar are a deal. Three men in a bar are a brawl and a referee. Add a woman, stir twenty-one times and you have a show. This is the essence of “Chops,” Michael Rychlewski’s new play about Chicago, city of jazz, mafia and unconcealed grit, premiering at Theater Wit under the direction of Richard Shavzin.

The play opens on a deserted Rush Street bar—well-stocked and unpretentious but nondescript—owned by Vince (Larry Neumann Jr.), who carries the tension of decades of unacknowledged labor in every gnarl of his hands. After midnight, sleazy retiree Walt (Randy Steinmeyer) strolls in with Kaki (Clare Cooney), a busty, leggy young dame in a fire-engine-red dress undulating with polyester ruffles. Cue a masterful banter on jazz greats that vaults from obsessive bouts of trivia and seductive admissions from Kaki that she listens to “Blue Flame” on repeat as she soaks in the bathtub (“All jazz ladies are freaky,” Walt assures her) to disturbingly competent dancing by both the old man and the girl.

“Chops” would be nothing more than a simple tale of seduction were it not for the surprise entrance of overaged greaser Philly (Danny Sullivan), slithering in with a bang through the kitchen door, all flash and thick wad of cash under a silver mane. The rivalry for Kaki’s attention that ensues culminates in the absurd, utterly absorbing bravado of a storytelling match, which only distills the overall exhibition of masculine pageantry that ornaments the pulse and retreat of the woman in the red dress, who goes to “freshen up” so many times that a speakeasy secret passage in the basement must be devised to get her offstage. Though juvenile and contrived in story and character, the success of a story is not in its parts but in its telling, which here is done with verve. (Irene Hsiao)