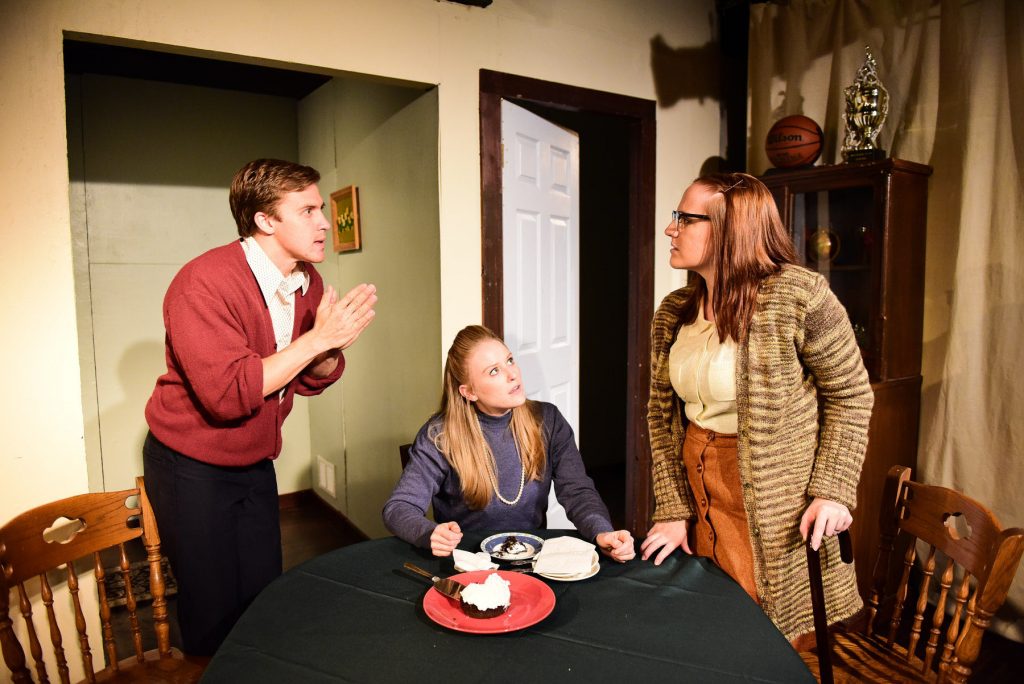 Every knickknack in the Hale family house clamors of an America that now exists and perhaps always only ever existed in small Midwestern antique shops: a miniature Christmas tree, a glass candy dish, a kewpie doll, a hand-high ivory bust of Beethoven next to the record player, a writing desk with compartments filled with dozens of letters to troops and a sports trophy crowning the china cabinet.

It’s some time in the 1960s, some place where basketball and peach pies matter. Former sports hero Victor Hale (Felipe Carrasco) is a basketball coach. His sister Grace (Sarah Koerner) is a stout-hearted nun. His pretty blonde wife, Sally (Sara Pavlak McGuire), is a computer programmer, which is only a more sophisticated version of cross-stitch since it doesn’t threaten Victor one bit. Sally’s brother, Buddy, is in Vietnam. His helicopter was shot down, and no one knows where he is. She writes him every day.

David Alex’s “Eroica” could go on and on, like a record skipping or a computer in an infinite loop, with Victor’s games, Grace’s prayers and peaceful protests of the war and Sally’s hope for Buddy’s safe return. Except there’s the draft, the war-time conscription which reveals the reluctance of subjects who are called unmanly, cowardly, selfish and inglorious even as they ship out to die.

With the draft and the Christmas cold air comes Charles (Garrett Young), formerly a guard on the high-school team Victor coaches. Charles was discharged without honor for drunken misbehavior a year before the scouts came to recruit kids for college. Thin, sharp and sleek as a weasel, Charles insinuates himself into the Hale home with his superior programming abilities and slick espionage techniques, which mostly consist of sloppy rifling through the neat stacks of calendars and address books all good Christians keep around.

The allegory is heavy-handed and the dialogue neither subtle nor revelatory—it’s this earnestness, as well as the hypocrisies that it deliberately and inadvertently exposes, that makes “Eroica” most American. (Irene Hsiao)