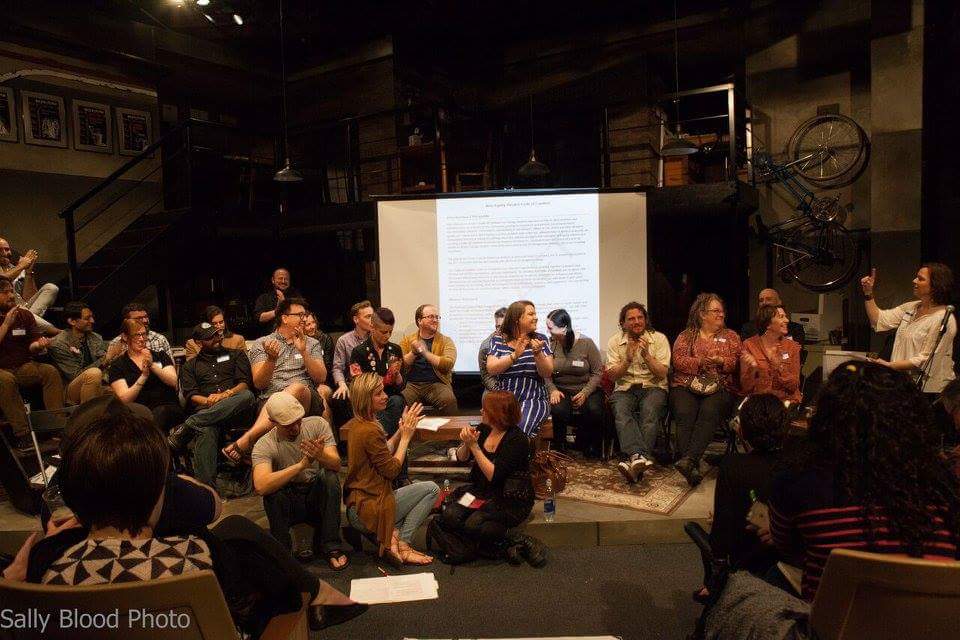 A meeting of Not In Our House/Photo: Sally Blood

On a muggy night in July, forty or so people gather in the rehearsal room at Victory Gardens Theater. It is a larger group than anticipated given the number of chairs set out. The circle expands to accommodate the crowd. Without much fanfare, the meeting gets under way. This is the first official gathering of Not In Our House (NIOH) since the publication of the Chicago Reader article that exposed a disturbing string of abuses allegedly perpetrated by Darrell Cox, artistic director of the recently closed Profiles Theatre.

NIOH’s origin story is as innocuous as it is inspiring. In late January of 2015, Chicago-based actor Lori Myers posted a status on Facebook in which she addressed her disappointment with the ongoing “sexual exploitation concerning young women in our theatre community.” She asked, “If your friend, sister, daughter or coworker was working under a sexual predator—what would you do about it?”

The post attracted hundreds of comments, telephone calls, emails and messages of all kinds. Weeks later, Myers founded Not In Our House as an advocacy group for victims of sexual harassment. NIOH helped organize several open support groups where victims of abuse could speak to their experiences, including those reported to have taken place at Profiles.

A misconception about NIOH is that its sole mission was to take down Profiles Theatre and to make a pariah out of Cox. This militant and limited view overlooks the advocacy arm of NIOH, which has been in place since its founding and is where the majority of the group’s energy has been and continues to be directed.

Nevertheless, the closing of Profiles was an undeniable victory for NIOH in that it enhanced conversation on how to mediate abuse within the theater community. NIOH has since been at the forefront of developing and honing that model in the hopes of preventing or at the very least deterring future abuses.

Yet at this meeting, those involved showed no signs of resting on their laurels.

Part of the meeting’s agenda was to further define NIOH’s mission. Under the mission umbrella are three silos: 1) offering support to the victims of abuse including pro bono or sliding-scale therapists, 2) examining antiquated institutional policy and language surrounding discrimination, intimidation, sexual harassment, violence and bullying and 3) refining the Chicago Code of Conduct, the aforementioned model designed for non-equity theaters and based on, and in several cases superseding, those of Actors’ Equity Association.

“Democratic” was the first term to come to mind during the meeting I attended though another, more fitting one has since emerged: tribal. NIOH has been described as more of a community than an organization. Yet within this group structure there are pillars: co-founders Lori Myers and Laura T. Fisher as well as Dawn Marie Galtieri, Aaron Christensen and Molly Brennan.

Myers is quick to defend the tribal nature of the group especially as it concerns the variety of different ages and experiences of those involved. “We learn from one another,” she tells me via email. “[It’s] ageist to say that we are experts and know more… that we need to teach those that are younger than us… that we don’t have the interest of young theater makers at the forefront of our conversations.”

Brennan agrees, citing the vocabulary of millennials as an asset to the group’s dynamic. “The millennial generation is equipped with a more advanced social justice vocabulary than someone my age. It’s just part of their landscape,” she tells me during an interview several days after the meeting.

The Code, which is currently undergoing a trial run through a pilot group of roughly a dozen theaters, is a twenty-two-page document available for download on NIOH’s website. In it you will find, among other elements, a clear outline of a complaint path, a detailed definition of what constitutes sexual harassment and intimidation as well as guidelines for staging and rehearsing sexual content and nudity, high-risk theater and onstage violence. Spearheaded by Fisher, the Code includes contributions from other NIOH members including Brennan.

Both Myers and Brennan are quick to assert that the Code does not aim to become law. “Once the [Code] is fully operable, we know that there needs to be a program in place in order for our Pilot Theaters to mentor or train other theaters so that there is a building of knowledge and self-governance,” writes Myers. The Code is meant to nudge non-equity theaters in the right direction as well as provide actors, especially those who are young or otherwise unestablished, with a firm idea of what kinds of behavior are acceptable within the theater community and what constitutes breaches of trust and safety.

Empowerment, accountability and self-governance are terms that come up regularly during the meeting and in my conversations with Myers and Brennan. Rather than apply a trickle-down method of speaking directly to the heads of non-equity theaters in the city, NIOH endeavors to make actors aware that they are a part of a network and that by working together, on- and off-stage, they can better protect themselves and each other from potentially inappropriate and/or dangerous behavior.

That sense of empowerment is directly related to the individual’s ability to take responsibility for their actions. The Code addresses this in the complaint path, where the very first step is direct communication between the parties involved. While accountability represents one of the slipperiest areas of concern, Brennan feels it begins and ends with a desire to reform negative behavior. However “the resource is for [the survivor] first,” she concludes.

In discussing the intricacies of what NIOH is setting out to accomplish, it becomes clear that at the heart of all these varying objectives is the victim. “Although NIOH may not be able to erase past abuses, we are able to ask the question: what would you like to see as the end result?” Myers writes, in reference to the victims. “Once we are able to define the past abuse and how to approach the resolution, it’s important that the abused knows what they want.”

Rage is an involuntary reaction to news of abuse. But within it lies self-righteousness, the white knight of self-centered impulses. It’s a truth that Brennan has absorbed over the course of the nearly year and a half between NIOH’s founding and the shuttering of Profiles. “I’ve learned so much about patience and focus through this process because when it first surfaced that [the abuse] was still happening I was ready to punch and kick… What I learned was to put the survivors at the center of my effort. To not further traumatize people because I needed revenge.”

There is a theme that unites these meetings, the Code of Conduct and the language used by Myers, Brennan and others. The ability to be vulnerable, a crucial element of performance, relies on the performer feeling safe in their environment. Brennan puts it best, “It’s not about breaking people down so they’re vulnerable and that’s where the vulnerability is. Instead it’s ‘I’m so strong, I’m going to get vulnerable.’”